I've just read a story that has caught my imagination and makes me want to travel to Paris poste-haste to research the life and history of Marthe de Florian, who was 24 years old in 1898.
The story is as follows:
In June 2010, the granddaughter of Marthe de Florian died at age 91.  Her heirs called in some professionals to find and enumerate all her property, among which was an apartment in Paris for which the "rent" (perhaps taxes or something like a maintenance fee, since the apartment was owned by the family) was paid every month and was up to date.  When the estate managers entered the apartment, they discovered it had not been unlocked for over 70 years.  Everything was as it had been left.  Marthe de Florian's granddaughter had gone to the South of France just before WWII and had never returned, although her estate kept the property payments up to date.

Evidently, Marthe de Florian left the apartment to her descendants, who kept it as it was when she lived there in the 1890's.
Can you imagine the magic of the moment of opening that door for the first time in 70 years???  The apartment was magnificent and reflected the haute couture of Paris in the 1890's.

Marthe de Florian was a rich demimondaine or coquette (lovely words for a group of upper-class people who lived a pleasure-seeking lifestyle.  Women, especially, did not abstain from sex before marriage and they did not stay sexually loyal to their husbands once married.)
Marthe lived in Paris in the 9th arrondissement, between the Pigalle red light district and Opera, near the Trinite church.  This is what that area looks like on Google Earth - to the right is the Trinite Church. I could easily picture the type of apartment that Marthe had as being in this area. 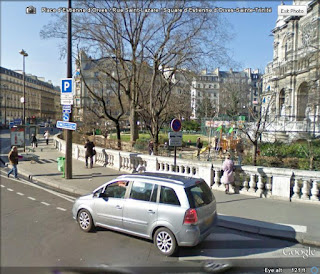 Here is another view of the buildings in that area, the area where Marthe de Florian would have lived in 1898. 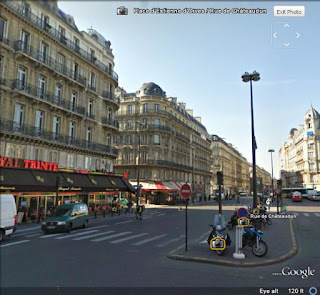 Here are some pictures in the news of the apartment shortly after it was entered for the first time in 70 years: 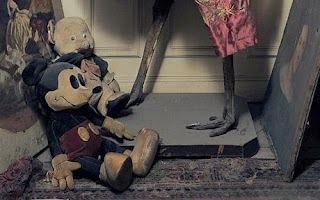 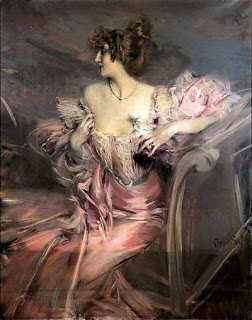 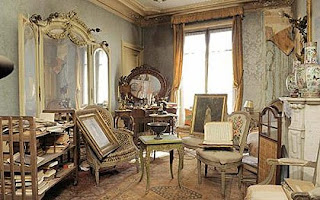 ﻿The painting is the big news.  It was painted by Italian artist Giovanni Boldini in 1898.  Boldini was born in the Northern Italian city of Ferrara in 1842 and moved to Paris in 1871.  He painted many famous women, all in similar clothes, it would seem.  If you Google his name in "Images", many portraits similar to Ms. de Florian's appear.  It is a beautiful painting, however.  Art experts thought it was one that had never been heard of until they researched the archives of Boldini's widow who recorded the painting in 1951.
It seems Ms. de Florian "entertained" her "admirers" in this apartment in the 1890's, among them Boldini.  ﻿Visiting cards from admirers, specifically Boldini, with a love note penned on the back were found tucked away in various drawers.  Marthe was also "admired" by Georges Clemenceau, Prime Minister of France from 1906 to 1909.
The love letters she received from her many suitors were wrapped in separate packages and neatly tied with different colored ribbons.
Just look at the pictures above and imagine.  The wallpaper is lovely, the high ceilings, the gold drapes, the huge mirror.  The vanity in the rear of the photo in the corner is breathtaking. 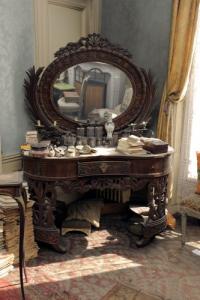 Just look at the closeup of this piece of furniture.  There is a table to the left that hold a candelabra, candles of various heights, indicating use, on top.  I love the sun slanting in the window on the carpet.  I think the windows must have been shaded, otherwise there would be a faded spot on the carpet from the suns of three quarters of a century.
What is amazing is that no one ever wondered who lived there, looked up from the street and noticed the shuttered windows - or perhaps they did and just moved on.  Imagine Hitler's armies marching into Paris in 1941 underneath that window.  I think of all the Jews looking for hiding places during the war - that one would have been perfect.  It's like a time capsule back to the 1890's - all the furniture, decoration, belongings.  The Micky Mouse is more modern, however - probably from the 20's.
I can't find anything else about Marthe de Florian on line.  Every instance of her name is just the same news article about the painting being found in the unopened apartment.  But I'll keep searching - I know someone is going to pick up on this story and do further research.
Here is the news story so you can read it for yourself
﻿
Posted by Susan Humeston at 2:31 PM

I had just read headlines of this amazing story on the internet and after looking around for further information found your blog.What an amazing story ! it is like a fairy-tale come true Thank- you for this post because it fills in details that I didn't know. I'm like you I immediately thought i must find out more about this story~ why would you leave an appartment in Paris vacant for so many years~ unbelievable!!
~Dianne

Hi, I also found the article and was intrigued by the story of the unopened apartment, more so then the value of the painting found there. I also wondered how the apartment filled with so many 'treasures' could have been unexplored by family members or other interested parties for so many years. I would have loved to have been with the team that went in for the first time. I can only imagine what that must have been like!

Wonderful article - Thank You. Like yourself, I'm more interested in the lifestyle of Marthe de Florian & what transpired behind the curtains than the portrait by Boldini - although the portrait says a lot in itself and is quite breathtaking! There is a story to be told - perhaps a novel of epic proportions. The photos in your article portray a sense of aristocracy that is palpable. Marthe de Florian lived near the Opera? Can u just imagine the lifestyle - the days, the nights, the VIP's, the champagne. Please keep me posted.

I think somehow this apartment was left to Marthe's descendants and was not changed or updated because of her memory. Why, I don't know, but it is romantic. Even though the granddaughter owned the apartment, all of Marthe's things, love letters, portrait, etc. were kept as in the 1890's. Very interesting story here, for sure. How I would love to find out about both the granddaughter who relocated to the South of France - and the grandmother who lived and loved in that apartment.

I am like the rest of those who commented; interested in the rest of the story not just the painting & stumbled upon your blog! Thank you so much for all the information you have gathered. It is the best I have found.

I do have to say that the painting is fabulous. It is a shame the family would not want to keep the image. (Again, what is the story there I wonder?) It sounds like the right person was able to purchase it though. I too would love to own it. It is beautiful & represents such a romantic mystery....

I have a feeling someone is going to research and write this story and we'll see it as a movie eventually and/or a book.

Have you found out anything new on this??

No - nothing new. Perhaps some digging in Google might turn up something new, if I get a chance.

I just finished reading a book called "A Paris Apartment" by Michelle Gable. The book is fiction as far as the main character, a Sotherby's furniture apprasier, is concerned however the rest of the book is the true story about Marthe de Florian's life and mystery apartment. Having an inside look at the apartment, love letters, journals, etc. included in this book answers all of the outstanding questions that the news articles did not cover. I encourage anyone who is interested in the story of Marthe de Florian to read this book. I couldn't put it down!

I read your comment about the book "A Paris Apartment" and immediately ordered it on Amazon. THANKS!! I knew somebody would either write about this or do a movie....or both eventually.

I have just finished reading The Paris Apartment and also am drawn to the back story so to speak more so than the painting only. But I've got a couple of theories. First of all, as to why the family did not keep the painting, it sold for 3 million dollars! Kind of hard to have that kind of money hanging on your wall no matter how much you might have liked to have kept it. Secondly, as to why the apartment was left untouched, could it be that when the granddaughter fled the Germans, she chose to re- invent herself? After all, she was the granddaughter of a prostitute, a high class one, but still on the fringes of polite society. And another theory as to why the granddaughter never came back, it would have a bittersweet journey at best. The Paris she had loved was forever changed by the war, and she probably had heard of the looting of apartments by the Nazi's. She may have convinced herself that her apartment also would be in shambles and there would no reason to return. Cannot wait to find out more on the true story so we don't have to continue speculating!