I've made some changes with the new blogger template options.  Plus, I got rid of the wintry photo from Oregon and replaced it with a pretty yellow flower that bloomed from bird seed in my back yard.  Goodbye winter (even South Florida had a winter this year!!) and hello spring and summer!
I'm looking forward to the rainy season with it's afternoon thunderstorms and explosive plant growth.  I'm starting now to pray for NO HURRICANES hitting my area this upcoming season.
On a spiritual note - HAPPY RESURRECTION DAY or HAPPY EASTER or HAPPY WHEN WE DIE (SINCE WE'VE BELIEVED IN CHRIST FOR SALVATION) WE GO TO HEAVEN, WHICH IS A FABULOUS PLACE AND WE'LL BE HAPPY FOREVER (UNLIKE HERE!!)
Here are some photos I took this morning.  First, my kitties.  The white and orange kitty is Junior Beans.  All cats have beans - those are the pads on the bottom of their paws.  When my daughter was little, we started calling those pads, "beans".  We even figured out that the big "palm" pad looked like a lima bean, while the others were navy beans or black beans or kidney beans.  Hence, all my cats have a middle name of "Beans"(their last name is ours - or whatever name we choose) .When Junior Beans became a member of our family, he had been discovered in our back yard trying to eat a peanut.  He was a very small kitten and no mother was around to take care of him.  We brought him in, although, being a feral kitten, he was tough to catch and tougher to handle at first.  My husband is not instinctive with kittens, so he tried to grab Junior Beans, who promptly screeched and scratched him royally, at which point he dropped the kitten and pronounced him ferocious.  A few weeks later, after trying to coax him to come to me with soft words and food, I was able to pick him up and give him rubbies.  He was starved for affection and loved it - he's been more my cat than my husband's ever since.  Since he was smaller than our other three (yes, we have four cats), he was named Junior Beans - not very original, but it has stuck and he knows his name.  He has a very quiet meow (unless food is involved) and sometimes when you make eye contact with him, he opens his mouth to meow but nothing comes out.  Junior Beans has several nicknames - "Batface" because he meows and nothing comes out and he looks like a photo of a bat with it's mouth open.  "Siberian Kitty" because he has the thickest, softest fur of all our cats - it's like bunny fur, which is another nickname for him.  "Goat boy" because he runs and jumps onto his perch in order to be petted and invariably bangs his head into the nearby door - hard.  All together he is "Bat Faced Siberian Goat Boy", alias Junior Beans.  He likes to butt the back of my husband's legs in the morning, causing his knees to cave.  This is because my husband has taught all the cats to sit for treats in the morning.  He has a strict schedule and the cats know it.  First, he boils the water for coffee, then he pours the water into the French Press.  Once he puts the top on the French Press, the cats know it's TREAT TIME!!  Until this moment, they've watched his every move, meowing, head butting his legs, smacking into his legs with their head (this would be mostly Junior Beans, a.k.a., Goat boy).
JUNIOR BEANS 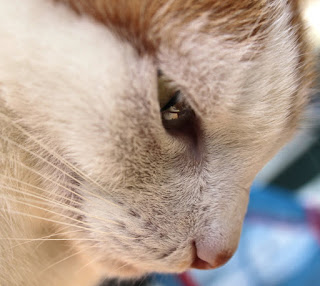 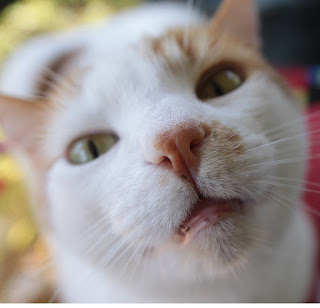 Next up is Neko Beans.  He is a daughter cast off (don't tell him, though).  He lived with her in her college dorm for some months until he was discovered and we had to bring him home.  He used to travel the six hours back and forth in the car with her when she came home for a weekend.  Cats don't like to ride, and he was no exception, but my daughter just popped him in the car and he knew he had no option, so he settled down - although we think he now needs serious counseling and/or anxiety/depression medication because of this enforced car riding. Neko is the skinny, I've-had-too-much-espresso cat.  He is also nicknamed, "Killer" because he can catch anything and his paws whip out before anyone or anything has even noticed.  Neko also likes to randomly run around the house at the speed of light, skidding for three solid seconds on the tile floor before his claws grab and he can take off.  When he stops, it is a four foot skid, often sideways and into something.  He must love to do this because every everning at about five o clock, he starts to race back and forth through the house.   He is happiest if he can cut you off in mid stride by these antics, racing in front of you unexpectedly.  Neko is also our "Angsty Boy".  When we brought him home from our daughter there were no other cats here.  There was only one very aged Beagle who ignored him.  He was king.  Then my daughter moved into an apartment and Neko went back to live with her for a while. Poor Neko - he's never gotten over ruling the roost here for a short time, and my husband jokes that his time living with our daughter has scarred him for life - hence the jokes about counseling (and smoking cigarettes).  Neko is also very talkative - I think maybe he is part Siamese somewhere.  He ALWAYS meows, sometimes repeatedly.  If you pet him, he meows.  If you look at him, he meows.  Sometimes he picks up a toy and carries it in his mouth to you, meowing the whole way in a muffled, wailing fashion.  Sometimes he meows repeatedly like this in the middle of the night and we wake up and go pet him and wonder if he has had a bad dream or something.  Neko needs extra love and care and gentle handling - and this he gets.  If hubby tried to hold Neko upside down, it would not end well for either of them.
NEKO 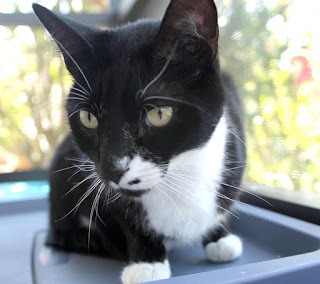 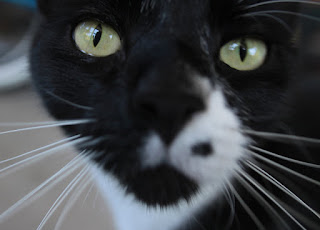 We missed having a cat when Neko went back to live with daughter, so we went to the Humane Society and picked out......Buster.  We didn't know what to name Buster at first.  We tried "Java" and other chocolatey coffee type names because of his beautiful coloring - but none of them fit.  We tried and tried to come up with names, but suddenly one day I knew his name as if he had told me - BUSTER.    He is the most beautiful cat.  He is officially a chocolate tabby, with ginger belly fur and chocolate brown "beans" on his paws.  His toes are outlined in black fur and he has a brown-orange nose.  In short, he is perfect, leonine, graceful, big and healthy.  He is my husband's cat.  My hubby picks Buster up so he is upside down and he loves it.  He is totally relaxed and purring so loudly that it sounds like a truck idling.  Buster talks with his eyes.  Sometimes he tries so hard to talk that his head moves - he has no words except "Meow", which he knows is inadequate, so he uses his eyes and body language.  My husband has taught him to shake hands.  Buster gets up on the counter near where we keep the treats and he waits until someone wanders into the kitchen at night and flips on the light.  There he is, at attention on the counter, talking as loudly as he can with those eyes and begging for treats.  All my husband has to do is walk over to him and he sits, meows and then holds up his paw.  Buster is a good natured cat, but he is the undisputed king, which is what has caused Neko to become angsty.  Neko came back to live with us when my daughter moved again - and this time we kept him.  But Buster was already here and Neko never forgot that at one time......HE was king.  He and Buster bonded, though, and to this day they are more bonded with each other than either of the other two cats.  When Buster misbehaves, my hubby calls him, "Buster Johnson" although our last name is not Johnson.  Ordinarily, he is Buster MacBean with an emphasis on the Mac.
BUSTER 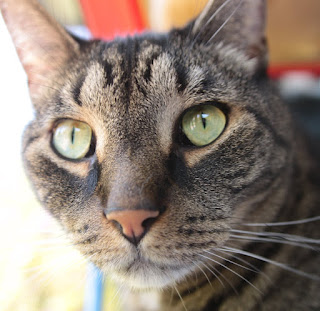 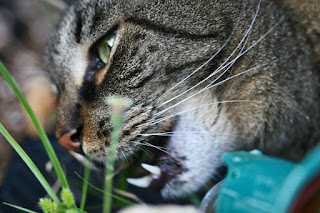 Next is another daughter cast off.  This is my favorite kitty, my baby, my Squee. 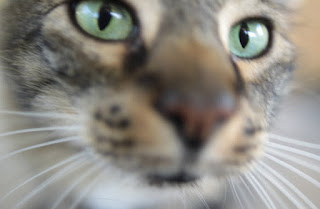 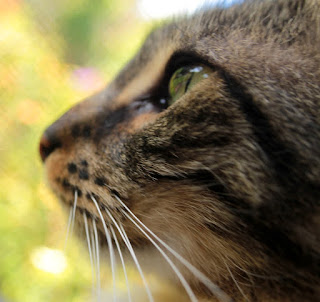 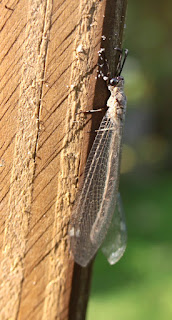 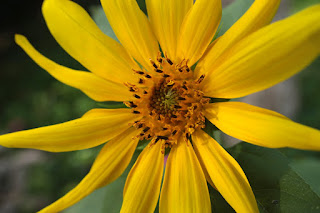 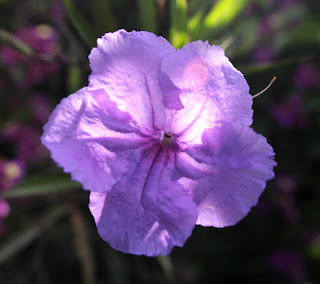 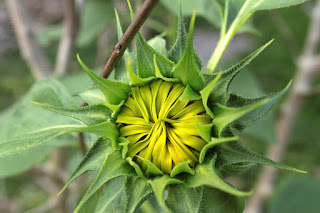 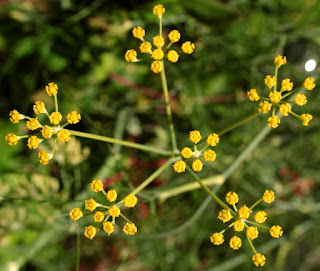 Victoria (our Maine Coon) is both a continuous source of laughter and chagrin.

They really do fear nothing. She thinks she can take on the dog next door (who both the UPS and USPS guys are afraid of) and cannot understand why we do not let her outside when Lexi is on the porch.

Stephanie says from what we have said, Victoria is a lot like Sassy in the movie.

When she is not being naughty, she loves to curl up ON one of us!

To think I know a lot of people who think cats have no personality and they just sleep all day.