Below are some photos I took on my whirlwind tour from Boise up 95 to Riggins (where Mountain time becomes Pacific time and we're magically moved back one hour in a second), through the mountains to the Camas Prairie. From there to Orofino, where my husband and I stayed in the most beautiful hotel room I've ever been in (and I've been in some very fancy ones thanks to conferences he's gone on and taken me) - courtesy of his wonderful brother and sister in law. From Orofino west to Union and Baker City, Oregon. Finally, from Baker City back to Boise, where after much laundry and re-packing, we flew home. My head is still filled with the beautiful images from all those miles (about 1200 total, my brother in law said - yikes!!)

My brother in law and his wife have purchased property on the Camas prairie near Nez Perce, Idaho. The following is a picture of part of their land. There is grazing land and crop land - and there is a deep cut or ravine with a large cave at the bottom. This was Nez Perce Indian land until the 1950's, when the first white owner bought it - and now it is in our family. No one can get down to the bottom of the ravine - it is a very steep death fall in some places - and one must walk in at a slant from the flattest point down into it. There is water at the bottom, so no one can get too far. How frustrating!! There could be bear, cougar and coyote down there, although I would think some of the cattle would be killed if a cougar were in the ravine. You want a place out in the boonies? This is it. I've never been in a more remote, yet settled area. The people are the salt of the earth and would help their neighbor out in a heartbeat.

Below are a few pictures taken on the Camas Prairie property. 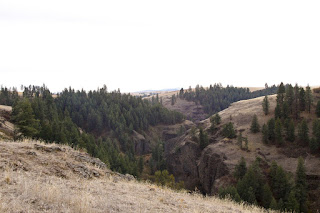 This was on the way through the mountains from Riggins to the Prairie. 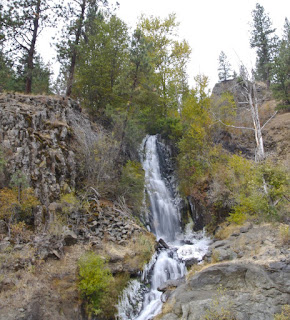 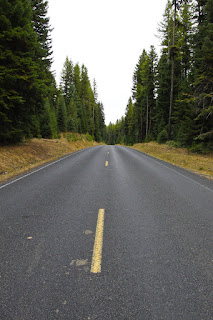 Below are the Blue Mountains outside of Union, Oregon. 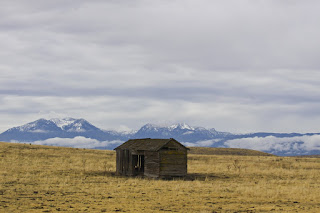 A working farm outside Union, Oregon.

Don't know where this was, but there are tons of abandoned, dilapidated old cabins and barns, some from homesteading and some from mining. 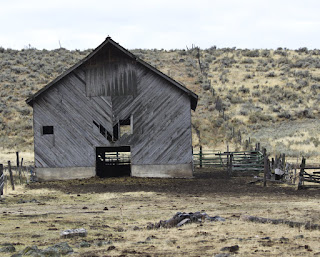 Below is Payette Lake. 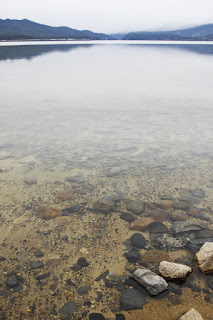 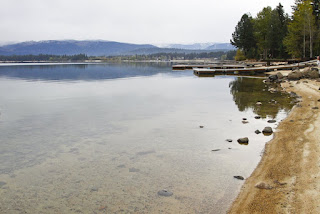 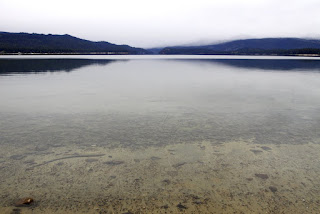 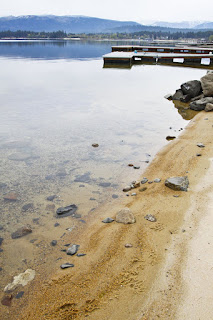 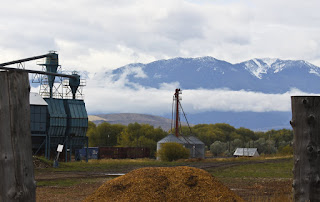 Below is a train somewhere on the way to Baker City, Oregon

We saw quite a few Red Tailed Hawks in their winter plumage. This one, below, was dining on top of a stack of hay. 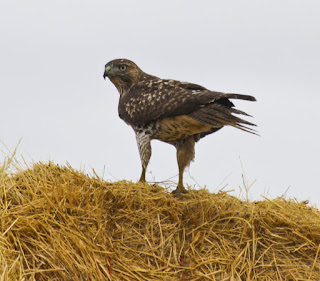 Train tracks outside of Union, Oregon. 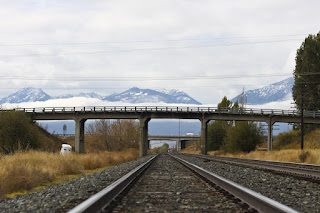 Posted by Susan Humeston at 9:15 PM

These are beautiful photos! And I like you story of the World War II vet, too.