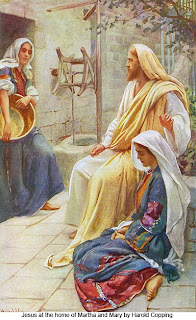 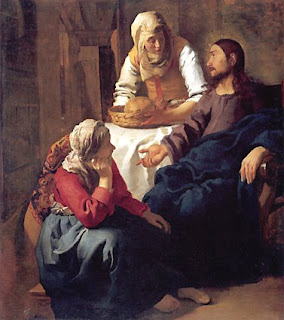 Posted by Susan Humeston at 9:48 AM

Ahh, this Martha who had to redecorate her home two days before Christmas guests arrived understands completely what you are saying. Thanks for the good insight into the story.

I, too, would be Martha - and I would be REALLY po'd at Mary.

I am new to your blog coming today from Brenda's comments. I learned a lot reading your study of Marth and Mary. It is quit easy to understand now. This Bible story has always left me wondering. I feel kind of sorry for Martha. I hope later she understood and did not feel rebuked to harsly afterwards. It would indeed be very awkward and embarrasing being told by Jesus in front of all others that her working so is not so important. I wonder how the days afterwards went in that house? Jody

I think the older I get the more likely I am to take rebuke - I just know that I need to be corrected now and then - and who better than the Lord Himself. I hope Martha took it well and took it to heart. He loved her as much as He loved Mary - and perhaps He corrected Mary for something else that isn't included in the Bible. I struggle every day with making sure my priorities are right - the Lord first, Bible study and prayer - and then all the cares and jobs of the day. I don't always succeed because I see a job that needs to be done and I jump to it....unlike Mary.