So, I did everything I said I would do. I put the pork roast in the oven, I made the black beans and the plantains and the rice, and I cleaned house and vacuumed. Not to mention I did a little of the laundry, but I started petering out at that, so tomorrow is another day for laundry.

Here are some pictures of my culinary adventure. I didn't buy the correct cut of pork. The recipe called for a pork shoulder. I couldn't find that at the store, although the clerk said that "pork picnic" is the same as pork shoulder. The "pork picnic" they had was huge, so I bought something called "Boston butt" instead. It wasn't as good as I would have liked. The flavor was there, but the texture wasn't as moist and shreddy (is that a word?) as the Cuban pork I've had at local restaurants.

Here is a before and after photo of the pork roast: 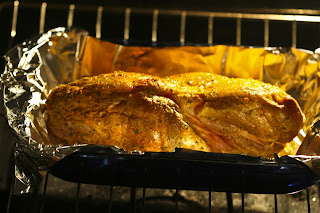 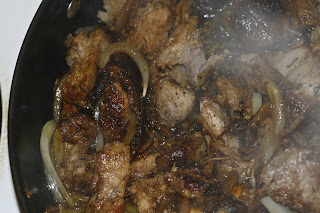 Next, the beans. I've made black beans before so I had no problem here, and they were QUITE good. I followed the recipe just so far, and when the taste wasn't what I expected, I added tomato sauce and green olive juice - call me weird, but it worked! I often experiment with "throwing stuff in" that way. Here is a picture of the beans, both before and after they had simmered for a couple of hours: 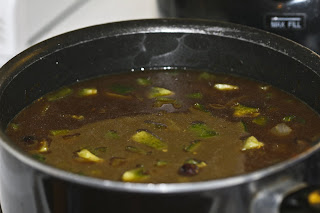 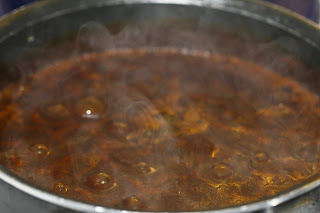 Finally, the plantains. I've cooked those before also. I have my own way of cooking them. I slice them into thin chips, add garlic powder liberally to them, and then fry them in a little olive oil until they are brown or even black-brown. They are better than the mushy gushy plantains you get at a traditional Cuban restaurant. Those, from what I've read, are fried in lard. This meal is bad enough, what with fatty pork - I'm not going to make it any worse by frying something in lard. I didn't take a before picture, just an after - and here it is: 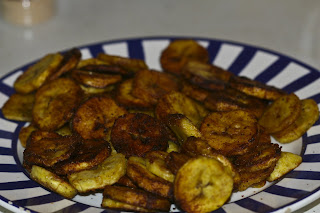 Last, here is a view of my plate after I served myself the rice and beans, the pork and some plantains. I used brown rice instead of white rice, also. I'm used to the flavor and texture of brown rice and it's better for you. 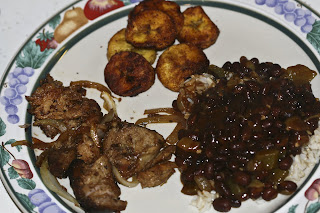 I loved the plantains and the rice and beans. The pork - my husband loved it, but then he loves everything. I didn't think it was as flavorful or moist as the local Cuban restaurant. I won't be making this dish very often - it's loads of work and it is fattening. When I do make it again, I'll try a different cut of pork. I had fun, though, and my husband is happy.
Posted by Susan Humeston at 7:32 PM

I recognize the plate!!!

I think I see the Freaking Virgin Mary in the fourth photo from the top!!!!

Your loving husband.
Can I have thirds now?????

Frank Furter - love the name. You can have dessert now, instead.

We are toooooo funny!! Thanks frank farter for the perfect response to my comment. . . .

My sister brought me some old books from England. It's hard to find dates in them, but one gilted Wordsworth volume was gifted to a lady in the Christmas of 1898 (I love inscriptions). Then there's poems of Charlotte Bronte, a Dickens novel with his "Notes on America," and Spenser's Faerie Queen (I'm sure printed in the 1800's.)

Those plantains WERE good....once in a while they just hit the spot.

I LOVE old books, so I can understand your interest in the books your sister brought. I also love inscriptions and I love to see the different "typical" handwriting over the years.