OK - so you're dying to know what Dennis Morgan and Gordon MacRae looked and sounded like back in the good ole' days.


Dennis Morgan played the sailor heartthrob in the holiday movie, "Christmas In Connecticut" - one of my favorite holiday movies. I never liked Barbara Stanwyck much - she plays the female love interest, but even so, I love this movie. I would have gone loony over Dennis Morgan myself.

And now - here's Gordon MacRae (I just learned how to embed the video in the blog so you don't have to click and go there....)


Gordon MacRae as Billy Bigelow, trying to go straight because he thinks he's going to have a child.....this is the most touching song from "Carousel". 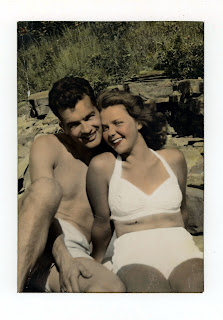 Do you wonder why I thought Mr. Morgan and Mr. MacRae were so handsome? The three of them might have been brothers - my dad and those two actor/singers. My father could sing, too. He was in the choir in college along with my mother (where they met), and he used to play piano - the Moonlight Sonata was his specialty. It's too bad maybe that Hollywood never got a good look at him, because they'd have slapped him in pictures so fast.....and my mom would have had to marry someone else (although she could have been in movies, too) - and then, where would I be? But anyway, you can see what I'm talking about here.
Posted by Susan Humeston at 6:21 PM

Gordon MacRae - yes, yes yes one of those voices you won't ever forget - too bad he was an alcoholic...Dennis Morgan - nope not one of my favs, does remind me of Dad though. . . .I would have picked Robert Rounsville - the Enoch Snow character in Carousel with Shirley jones and Gordon MacRae. He also played the lead in an early rendition of Tales of Hoffman - what a voice!!! - he had that special something that only some tenors have. .. . beeeutiful!! He also played the priest in Man of Lamancha in the 60s. What a long career he had and his voice was truly magnificent.

I guess it's just the dark hair and handsome face.....you know if dad had made it to California, they would have snapped him up in an instant - and mom, too......why is this important? It's not - I'm just a sappy sentimentalist, that's all.

Smart ass - I read you blog all the time - I just was away this past weekend and didn't see it as quickly as I usually do. I just don't always feel the need to 'converse' once I've read what you wrote. . .You're just in this mood 'cause you're not happy with the way things are going you know where. I'd say you were selectively sentimental and rarely sappy - usually to do with some cat, bug, bird or other critter