Laverne's mother kept a very careful scrapbook for her when Laverne was in elementary and middle school. Here is Laverne's kindergarten picture. The same children followed with her up to 6th grade: 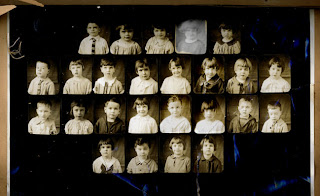 Here are the names in photograph order - the handwriting is, of course, Laverne's mother, who was, incidentally, a teacher in the Pittsburgh schools. By the way, Laverne is in the second row down, second from the left. 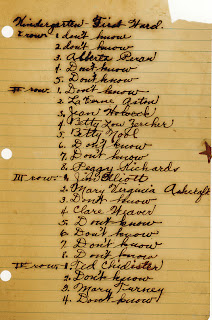 There are a lot of "don't know"s on the list, but if you look at the photos from later years,(which I will be posting soon) I think you can find the same children - and their names are recorded for those years. One thing I found interesting in the scrapbook - Laverne's mom used stick-on stars as tape (the kind teachers used to use to put on student's excellent work as reward). Either Scotch tape hadn't been invented yet, Laverne's mom thought these stars were more creative - or they were just out of tape. I can't believe the last is true because so much care was taken on the entire scrapbook.
Well, if you clicked on the Scotch tape link, you can see that in 1926 or 1927, the year of kindergarten for Laverne, adhesive tape for paper hadn't been invented yet. Let's see about paper glue. All I could find is the history of Elmer's glue, which wasn't invented until 1947. There have been adhesives made of fish and bones for thousands of years, but perhaps none for paper. In my grandfather's old photo album from 1916, there are little black corner photo holders that were licked and placed on the album paper - just like Laverne's mom's stars.....so perhaps that was the only method of glueing or attaching paper to paper in the late 1920's - if it wasn't pre-glued like an envelope, it wouldn't stick.
Posted by Susan Humeston at 7:41 PM