Let's take a trip down the Florida East Coast Railway. It's 1935 and it's cold up here in Pittsburgh. Cold, wet and dreary. Florida would be SO nice. That's where LaVerne and her mother went - to Daytona Beach. More on that in a following post. For now, let's just enjoy our trip! Excited? 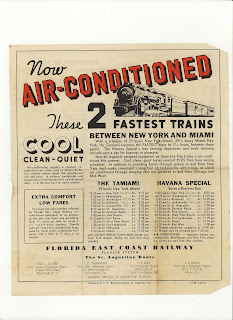 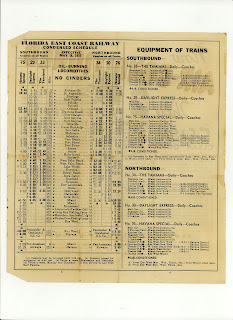 This is the schedule - let's pick our flight...er....train. It must be comfortable and it must be a sleeper. After all, we're going to be traveling overnight. Laverne and her mother must have had to take a train from Pittsburgh to either Philadelphia or New York City. From there they could go south. In the 70's I took a train from Penn Station in NYC to my friends in Maryland. Penn Station was huge, busy and overwhelming then - and the days of train travel had significantly dimmed by that time. Imagine Penn Station in 1935. Glamorous, well-dressed men and their families, "hicks" from out of town, traveling to other places via Penn Station - a whole gamut of 1935 US humanity at that time.