Photos and the Steamy Everglades

Feeling the noose of debt and age made me pretty melancholy on Friday.  The discovery that my fine plan to have all our debt paid off in about 2 1/2 years had been dealt a blow in the form of less money to dedicate to that endeavor caused me to be temporarily discouraged.
But my husband and I put our heads together for a solution or solutions and, instead of the issue becoming one of contention, it became one of unity of purpose.
Saturday morning we began to discuss possible solutions as we ate breakfast, and then, noticing that the day was gloriously sunny and, that everywhere there was water, it was still, reflecting the skies and clouds above it, we decided to drive out to an area of the Everglades that we have frequented for years.

When the canal builders in Florida dug through the muck to make the water flow out of the Everglades in the early 1900's, they created large embankments on either one or both sides of every canal.  These embankments have been flattened on top and paved with gravel.  Boaters and ATV riders and hunters drive on these "roads" into the heart of the Florida between the two coasts.   Years ago when our Ford pick up was a younger, more healthy vehicle, we used to take it on these roads.  We "discovered" these roads by chance, just driving further and further away from civilization and turning down whatever path we could maneuver.  I still remember the sense of adventure as we saw these areas for the first time, never having known that the gravel canal roads existed.
Over the years we have chosen one particular path through the Rotenberger and HoleyLand Wildlife Management Areas.  There are two ways to approach this same path.  From I-75 at Snake Road or from Route 27 at the Broward/Palm Beach County line.  We chose to take the I-75 entrance on Saturday, but I'm describing the entrance from the US27 entrance in the following paragraph.  My husband gives a much more detailed description of our route so that you could follow it if you so desired.

From the route 27 entrance at the Broward County/Palm Beach line there is a paved road that leads off to the west into the Everglades.  This road comes first to the HoleyLand area and then to the Rotenberger area that adjoins it farther inland.  As we drive down this road, it becomes gravel paved and we leave the land of paved roads and many cars behind.  There are sunning gators on the canal banks to our left, along with all species of water birds - egrets, herons, both blue and white, cormorants and anhingas.  We've seen otters gamboling along the gravel road as they pass from the canal water to the underbrush and marshland on the other side of the road.  There are turtles of all kinds, some sunning, some floating and, in the winter, there are migrating birds from northern climes.  The birds usually have to be coaxed by curiosity from their brushy hideouts by the studious use of "pishing", a term used by birders for the "shhhhhh" sound that seems most successful in drawing birds out to see who or what is making that noise.
As we traverse this road we come to water management plants, giant white buildings with huge toothy obstructions across the center of the canal, allowing water to flow at a particular rate, and, in the case of flooding from hurricanes, can be opened to let water flow out freely through the canal system to the distant ocean.  Yesterday we came across no human beings until the very end of our route.  We came across some "nature enthusiasts" actually standing in the canal up to their necks sipping beer from blue cans.  As we watched, they slowly trudged up out of the water and we saw they were fully clothed.  It was indeed very hot and there is little shade in the grassy swampland, but standing in a gator and water moccasin infested canal up to one's neck, filled with beer is not my idea of an acceptable way to cool off.  I thought I would see one of them disappear in a huge splash of water at any moment, pulled under by a hungry gator.  Thank heavens that did not occur.  I know they kept their shoes on because the bottom of the canals are mucky - I would imagine in some places you could sink pretty deeply in the muck.
Finally, after describing a rough square on a map, we come out to Interstate 75 near the Indian reservation quick store and gas station on Snake Road. (Or, if we enter from I-75, we come out on Route 27.)
It was brutally hot and steamy whenever we left the air conditioned sanctuary of our car.  However, there were many species of grasshopper, butterfly, bee, wasp and dragonfly to photograph.  We saw hawks and even one Eastern Kingbird, a kind of Flycatcher.  My favorite part of the day was watching a giant lubber grasshopper swim across an open area of water.  Both my husband and I thought sure something would grab him from underneath - a turtle or fish - and eat him, but he made it to the other side safely.  I did not know that grasshoppers could swim, but I have now seen one do so.  I did not get a picture of this activity or of the Eastern Kingbird, but my husband did.  Here is the link to his photos and description of yesterday's trip.
So, now that my lengthy lead-in diatribe is over, here are the pictures.   First, a species of dark honey bee on a Bidens Alba Radiata, commonly known as a "Beggar's Tick" flower.  This is a common South Florida weed beloved of all creatures that love pollen and nectar.  It is very "leggy" and very persistent.  I have some in my backyard, and I keep it under control, but never get rid of it completely, because it is free, grows like crazy and the butterflies and bees LOVE it.

Don't forget to click on each picture to get a bigger, better view. 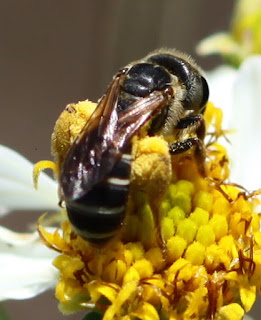 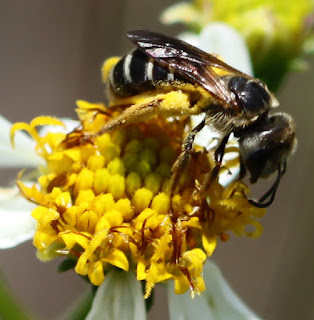 Next - a dark indigo blue wasp.  He looks black when the sun doesn't shine directly on him, but what a beautiful color he is in direct sunlight!  I believe it is a blue mud wasp. 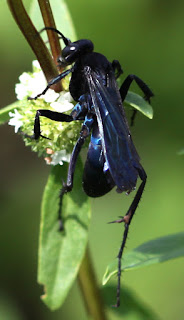 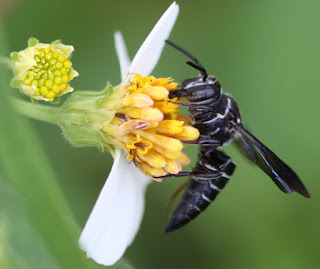 A Bachelor's Button plant.  There are yellow ones, also, but this one was the white variety.

A closeup on the mature flower.  It looks like a pincushion.

Next, below are two pictures of me holding a lubber grasshopper.  While many of the other grasshoppers we saw yesterday could fly and could not be easily captured without a net and a lot of speed, these lumbering creatures can be coaxed onto your hand easily, and then they don't want to leave. This one even nibbled a bit on my skin.  Perhaps he was trying to figure out what I was. 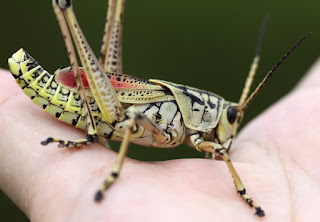 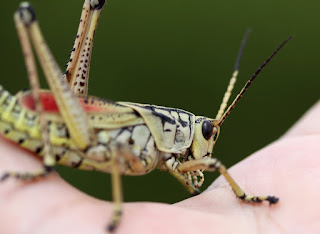 This fellow below was so camouflaged I barely saw him and I'm convinced he believed I couldn't see him.

Next is a bright green, very small grasshopper with little googly eyes. 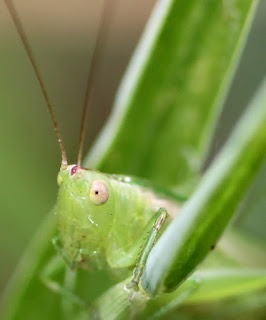 This fellow blended in with the gravel quite well.  It looks as if his head is down, and I can't quite figure out where his eyes are, but I see his antenna. 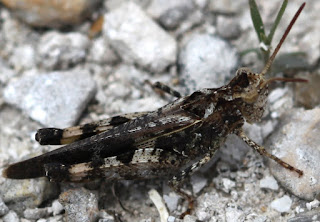 This fellow below was one of the flying grasshoppers.  I watched a few of them fly right alongside the car as we drove, and their wings have a bright green patch on them when they are open.  Otherwise, they are a golden honey color.  My friend here was eyeing me with suspicion.  I tried to scare him enough to get him to fly off so I could get a picture of him with his wings open, but he didn't fly away until I gave up, of course. 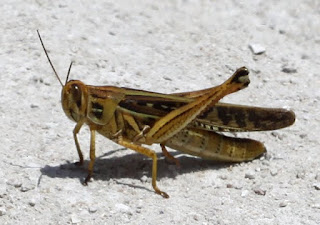 I love this guy.  He has those cute googly eyes, too.  Nice "thigh" muscles.  The minute and detailed structure of these tiny beings is amazing to me. 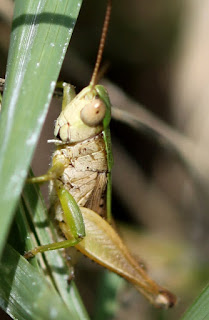 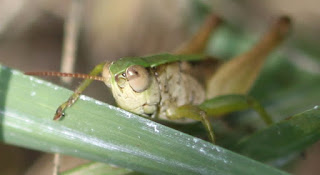 I think this dragonfly is an Eastern Pondhawk.  Up close he looks like he's trying to do "blackface" only with green lips.  This is surely a cartoon face and it just makes me laugh out loud.

A beautiful green dragonfly - believe it or not - SHE is an Eastern Pondhawk female.  She looks so totally different from her blue mate!   Below her eyes are looking straight ahead.  The second picture of her shows her turning her head and casting one big eye in my direction. 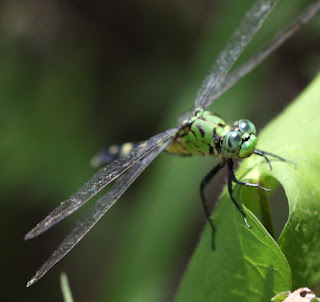 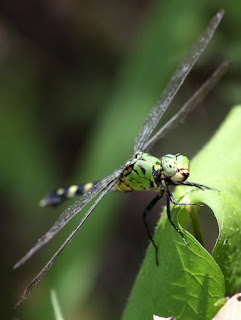 I hope she'll forgive me for this "rear" view.  You can see the sun shining on her wings. 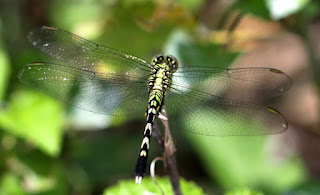 The next dragonfly/damselfly is called a "Rambur's Forktail" and this is the female.  She has the red "body" and green/blue "tail", while her husband is blue/green and yellow striped and not as bright as she is.   The second picture is her in flight.  You can just make out her wings like helicopter blades. 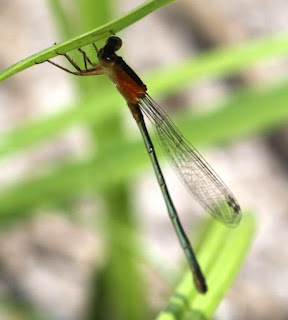 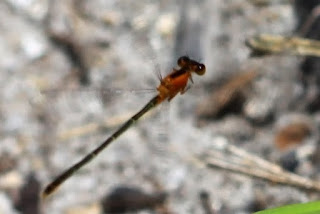 Below is what I thought was a Queen butterfly, but now I think it may be a "Soldier" butterfly.  These both are Monarch lookalikes and the Queen and Soldier look almost exactly like each other.  Once again, these were gathering nectar from the common Beggar's Tick flowers that were everywhere. 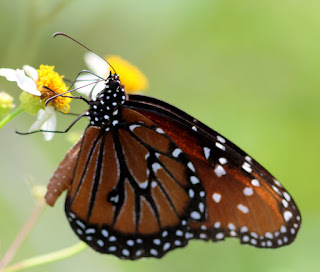 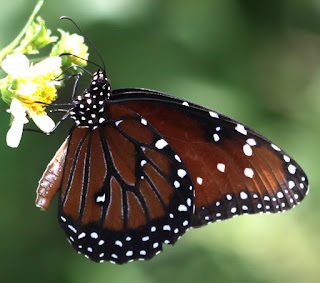 The speckley betterfly below is some sort of skipper.  I could look it up, but I think I'll stick with Speckley winged.  OK - I looked it up briefly and I THINK it might be a "Grizzled Skipper". 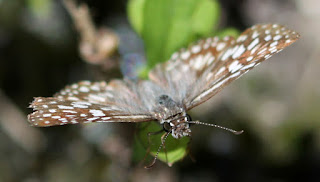 Here is an unusual category.  Insects that landed on my jeans.  Even though it was unbelievably hot, I wore jeans for protection from bugs, snakes (not that they would be adequate protection against a bite, but I hope to not get close enough to any snake for that), dirt and dust.  For some reason, insects seemed to be attracted to my jeans, perhaps it was the bright indigo blue color, I don't know.  At one point I had both the Eastern Pondhawk female AND a HUGE black carpenter bee looking bug on my jeans, but I could not get a picture of the big black bug fast enough before he flew away.  Since he was on my jeans covered leg, even though he was big, I wasn't concerned.
The first bright orangey yellow butterfly is a skipper.  Blue and yellow are complementary colors and they do look beautiful together.  I believe the name of this skipper is "Rare Skipper".  It looks as if he/she is trying to get something to eat with their proboscis, but of course my jeans will offer no sustenance. 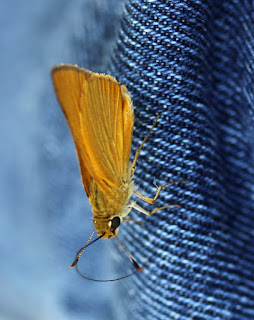 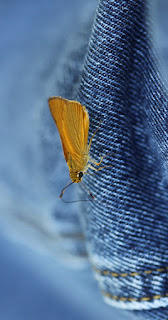 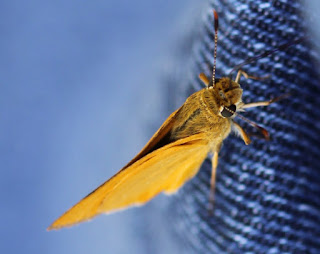 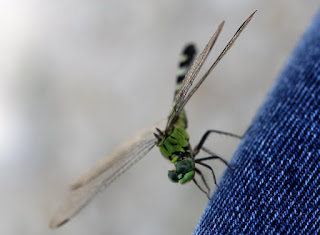 Next, two plants that I admired.  The red flower plant is called a "Phasey Bean" and it grows in "disturbed areas".  It is native to South America.  I think it looks like a tiny orchid. 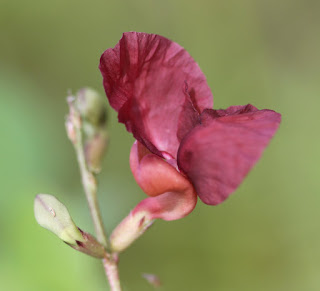 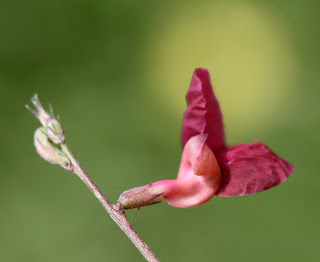 Some sort of grass that looked especially wheatlike and attractive.  It kind of looks like Sea Oats, but we were nowhere near the coast. 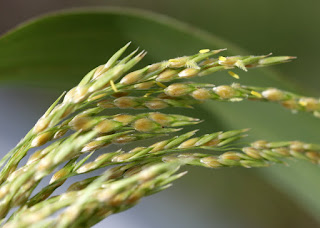 Finally, when we reached our second stop area near some grazing lands the trees and the field next to them had a large flock of cattle egrets.  As soon as we parked they got nervous and when we got out of the car, they began to fly and move to a more distant spot.  I caught the one below as he watched us and then flew from the gravel road to a safer perch. 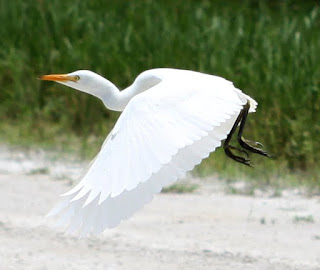 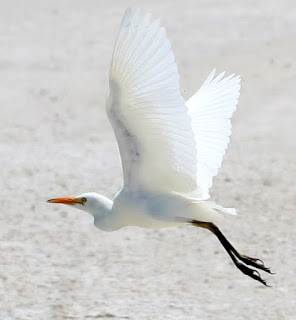 That's it.  We were out in the Everglades for about 3 hours.  We saw some rain clouds in the distance, but it the daily thunder showers waited until we got home before they came.  It was a very peaceful and beautiful day out in nature.
Posted by Susan Humeston at 10:00 AM

i'm gonna buy you a ring flash for xmas!

What will a ring flash do? And thanks for the early Christmas present!!