While I was at the beach this morning, I noticed two people.  One was a thin black man with dreadlocks down to the back of his knees.  He was swimming and exercising and you could see he was LOVING the water.  I was not too far from him with my mask, snorkel and camera and one time we made eye contact, we smiled.
Later, I noticed him by the entrance to the beach where the fresh water shower was.  He was washing his dreads with shampoo.  Later, he dried his hair by holding it in a pony tail and twirling it around over his head very fast.  I thought all this was interesting.  I think if I was black, I would have dreadlocks - it is the most natural way to wear their hair.  It keeps it soft and natural looking - and you can keep them nice and clean and neat looking.  Anyway, when I was leaving, he was down the walkway almost to the street and he had stopped to put some sort of cream or conditioner on his scalp.  As I passed him I turned and wished him a great day - and he said, "same to you, mommy", which I loved.   Must be a Jamaican slang thing - it was lovely.
Last week in church, the man who sits behind us every week - he is an older man and he always wears a suit - when it was time for us to greet each other, I shook his hand and he said, "Mornin', darlin'."  Aw shucks - I just melted.  My husband was next to me and chuckled because he knows I'm susceptible to things like that, when they are natural and unstudied.  I could tell that was just the way this gentleman spoke - lovely.
There was another person at the beach that caught my attention.  It was a young, attractive black woman.  She had shoulder length hair and she was fully dressed in jean shorts and a nice shirt.  She was standing knee deep in the water and there was a large yellow envelope clutched under her left arm, against her side.  She was there for a while - I wondered why she didn't have a bathing suit on and thought she was taking a break before going to work, enjoying the beach.
Then I noticed her leaving, walking over the path to the street.  As I turned to face the water, there was the yellow envelope floating on the water.  She never turned around again and she was way too far for me to yell.  I went up to the envelope to see if there was anything in it - perhaps it was garbage and she had dropped it unknowingly.  I picked it up - most of it was still dry, but the parts that were wet were disintegrating already.  It had something heavy in it at the bottom.  She was gone and I was curious, so I poked at it until it opened.
Inside were 3 half hamburger buns, some firebush flowers and a bright orange flower of a bush I couldn't identify, both of which she must have picked at the entrance to the beach, because I saw those bushes too, as they were full of butterflies.  Also, there was a fresh egg (I broke it - it was not hard boiled) and some powder that fell to the sand under the water - I didn't touch it since I didn't know what it was and it was too late now to identify it.  I took a picture of what floated and I realized it was some sort of offering.  There are a lot of Caribbean Island people here and so there is some Santeria and Voodoo stuff, but I had never witnessed anything before.  Fascinating. 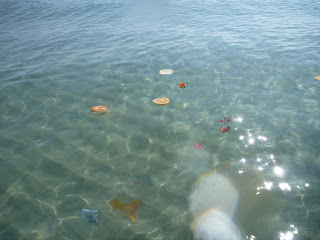 You can see the hamburger buns floating on the water with the two flowers.  The egg sunk immediately, so it's not in the picture.
Later, I was swimming and snorkeling and I noticed something bright white under the water.  I put my mask under the water and saw that it was paper.  I picked it up and saw that it had come from the yellow envelope also.  It was written on with ink that won't run in water, so I took it up to my towel and dried it off.  Here it is: 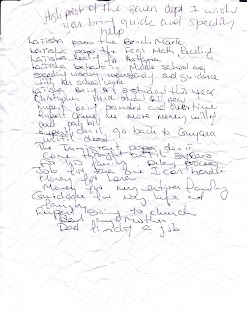 It seems this woman was praying in this fashion for family members - I have to Google "high priest of the seven depts" and see what I get.  (I Googled it and got nothing - I have no idea what this is). Click on image to make it larger, so you can read it.

I don't know this "high priest" guy, but I do know Jesus Christ, so I will keep this paper and pray every day for this woman and her family.  Perhaps good things WILL come to her and, if she doesn't know Jesus Christ, I will pray especially for that.
Posted by Susan Humeston at 1:25 PM