Looks like Fay has brought some friends along. She is barely out of the picture when we have Gustav to think about. He is far more robust than Fay was. Let's hope he stays to the south of South Florida AND Cuba
Tracking for Gustav as of Monday, 8/25/08 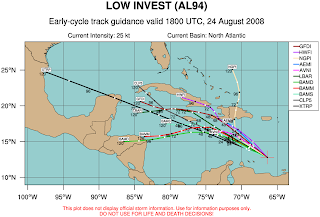 The "cone of death" for Gustav as of today:

Meanwhile, my friend at Seablogger.com has noted a few other tropical systems that are "popping up" TD8, already in the North Caribbean, and not posing a threat to the US at this time - and another strong tropical wave that just exited Africa's coast. It looks like a busy Hurricane season, unfortunately. The weather guys will be happy, but they're about the only ones who will be. Read Seablogger's assessment, both of Gustav and upcoming storms - he is a former mariner and a weather geek who knows his stuff. I read his page to watch tropical storms, rather than refer to the news.
Posted by Susan Humeston at 7:51 PM