Yesterday I promised that we'd see what LaVerne and her mother had for dinner. Actually, we can't know for certain exactly what they had, but we can see what they had to choose from. Here is the menu from their trip on the Florida East Coast Railway, circa 1935: 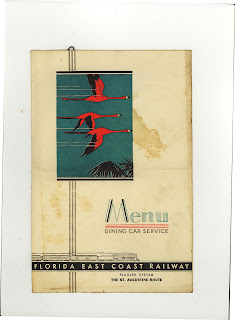 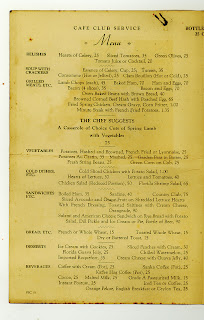 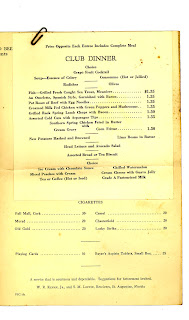 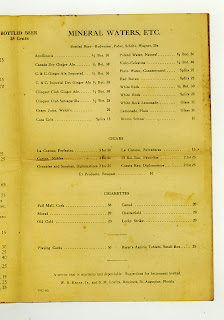 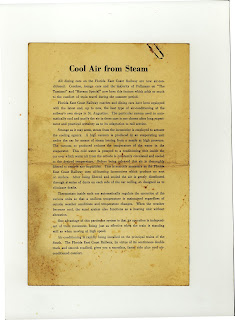 The second page of the menu had a small insert attached with a rusted paper clip. It gave more dinner options. The third page is actually the second page without the small insert. There you will see what beverages could be purchased. Finally, the back cover had an explanation of how the train was cooled and heated through the use of steam - perhaps something to read while you were waiting for your food.

I vote for the Southern Spring Chicken Fried in Butter with Cream Gravy and Corn Fritter, New Potatoes Hashed and Browned and Lima Beans in Butter. Butter.....mmmmmmm (I dislike margarine, which I thought was invented during rationing in WWII - this is pre WWII - BUT I was wrong).

Beverage? I'd have to try either the Apollinaris or the Clicquot Club Sarsaparilla, since I can't imagine what either of them would taste like. Hold on - I'll Google them......

Aha!! Apollinaris is billed as the Queen of Table Waters.
Clicquot Club was a company that produced soft drinks of all kinds until it was purchased by Canada Dry in the 1960's.....
That still doesn't tell me what sarsaparilla tastes like.....according to the article I attached to the word, "sarsaparilla", it takes like a more birchy root beer and Target is now bottling a naturally and artificially flavored sarsaparilla drink which I'll have to purchase just to taste it.

Since I now know what each beverage is, I vote for the sarsaparilla.

There's only one thing that bothers me about this idyllic look at railway travel in 1935. Ever the realist, I know that my black friends would not have been passengers on this train with me - they would have been the porters and waiters. While that was a good and honorable job, there clearly was an uncrossable line between servers and passengers.

I don't know about you, but I'm going to enjoy my dinner here in 1935 and leave a big tip for my server. I can't change history, but I can do a little bit to show appreciation to those who make my trip so comfortable.

Hey! This is a great site!!