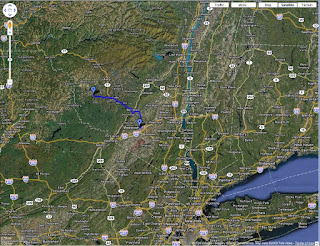 I was 13 years old and had a crush on my girlfriend's two older brothers (who were 15 and 17 respectively) who were in bands and had long hair and were quite cute. They were also pretty wild, but a 13 years old could dream couldn't she?

They, along with their 13 year old sister, my friend, were allowed to go to Woodstock. I wanted to go so badly and I begged my mother who instantly said a firm, unarguable "NO". Looking back, I sure don't blame her - if it had been my daughter, I would have laughed out loud first, asked if she had a fever, and then said a loud, firm "NO". If I had gone, I would have been scared to death between the messy, rainy, muddy, naked, tripped out people and the messy, rainy, muddy, semi-naked, tripped out performers.

In any case, I remember that weekend - I spent the day at my other girlfriend's house in Pine Bush, NY, a very rural community. I lived in Middletown which was a few miles away, but a little less rural at that time than Pine Bush. Today, Middletown is a subset of New York City, but it wasn't quite there yet in 1969. At the top of the post is a map of the route one would take today from Middletown to Bethel, NY - the actual place where "Woodstock" occurred (it didn't occur in Woodstock, NY - very confusing).

Anyway, my friend and I stood out on the road - route 209 - a 2-lane country road, and waved at all the Woodstockians driving by jammed into Beetles and Tie Dye painted vans and rickety vehicles. They all waved back, tooted their horns, made the peace sign, etc. We SO longed to be a part of it, but shortly after that weekend I forgot all about it. Yes, I heard about it in the news, but I didn't listen to news much when I was 13. I remember the coverage of the Vietnam war more than Woodstock. I do remember the adults assessment of Woodstock as a disgusting debacle.

Let's see - I was 13, which means I was going into the 8th grade at a brand new school. I had gotten grades high enough to enable me to enter an "advanced" 8th grade at John S. Burke High School in Goshen, NY (still in operation - has a web site). Historically, the school only went from 9th to 12th grade, but the accelerated 8th grade was brand new, and I was in the first class. It was a little scary because I had gotten used to St. Joseph's School in Middletown. This parochial school went from 1st grade to 8th grade and I was leaving my friends to go to a new school with new people. I started St. Joseph's in 3rd grade due to pressure from the parish priest on my mother to take me from public school to our church shcool. So, after five full years, which, when you're 13, is a large portion of your life, I was going to attend some place new.

Once I went to high school, I changed. My world changed and looking back, I didn't change for the better. But in 1969, I was 13 years old and I had my whole life ahead of me.......as Mary tapped me on the shoulder to wave at yet another jalopy on the way to Woodstock.

Here is an article from my home town newspaper about Woodstock 40 years later.

Posted by Susan Humeston at 4:38 PM