A Tribute For Neko

We've lost one of our family members.  We've had four cats for over 10 years - Neko and Buster who were natural companions, and Squeebles and Junior Beans who are best buds.

Friday started the nightmare of Neko having what appeared to be mild local seizures.  He would meow loudly a couple of times, drool and stand in place.  This happened once Friday night and then again Saturday morning.

From that point on it was a roller coaster of stronger and more frequent seizures, trips to emergency vets who could find nothing wrong other than the seizures and Neko getting sicker.

Saturday he spent some time in my room lying on my chair as he usually did, looking like himself, when suddenly he would make funny gasping noises, fall off the chair to the floor and twitch uncontrollably, his body moving across the floor with his jerking movements.  One of our other cats, Squeebles, looked on in shock and backed away while Buster tried to approach him slowly and then spooked and ran away.

By the end, Neko was seizing almost constantly and my husband took him to be put to sleep - we had looked online for information and nothing was promising.  I couldn't stand to watch him flailing around, sleeping peacefully one moment and the next flung to the floor, his legs, neck and face jerking and throwing him around.

Unfortunately, the vet thought phenobarbitol would help and instead of euthanizing Neko,  gave hubby those pills to give Neko.  Neko ate some tuna with the phenobarbitol as prescribed, but it did not improve things.  The whole night Neko stayed under our bed, meowing loudly every 20 minutes or so and drooling, his eyes dilated.

Finally, by the morning, hubby took him back to the vet to put him to sleep.  He had suffered enough.  He didn't know who we were, where he was.  It seemed he was hallucinating.  When he would get spooked, his skinny black tail would always puff up to about 3 times it's size, and that is how it looked now constantly.

At the vet's they gave him some gas to calm him down, and then the final needle.  And peace returned both to Neko and to our hearts, although we will never forget him.

About 13 years ago, when my daughter was in college, she wanted to sneak a kitten into her dorm.  She felt lonely and we knew if she was discovered we would take the cat.  So we went to the local Humane Society and we were put in a separate room.  They brought a tiny black and white kitten in with huge eyes who wouldn't stop meowing and rubbing on us.  That was Neko, needy from the start.  We brought him home because he seemed so desperate to be loved.  He had kennel cough and we gave him his medicine and loved his needy little self.

My daughter took him to college with her, driving him in her car.  He became used to traveling with her.  He was a hyper kitty and kept her entertained, in addition to being a great hunter who kept the local roach population down for her.   Of course, the kitten was discovered and had to come live with us.  We had an aging beagle and a cockatoo, so what was a cat added to the mix?  We became attached to Neko until my daughter moved to an apartment  and could take him back.  My husband drove Neko back to Jacksonville, where my daughter was living, Neko riding on his shoulders the whole way, meowing and digging his claws in nervously every now and then.  Missing Neko, we went to the Humane Society and brought home another kitten who became Buster, our king kitty.  At some point, I forget the reason why, Neko returned to live with us.  We now had 2 kitties and they became companions to each other.

I always called Neko our "Goth" kitty because he was never satisfied.  He was jealous of the other cats we subsequently acquired.  If we called one of them by name, Neko would come anyway hoping for rubbies or food or both.  He made eye contact and meowed demandingly a lot.  If my hubby came to give me a hug, Neko would demand to be petted, too, meowing loudly until he got what he wanted.

Neko also resented the other cats.  Although he and Buster were friends, Neko remembered the halcyon days of being the only cat in the house, and never got over having to concede rubbies and attention to any other cat.

As we acquired Squeebles and Junior Beans, both of whom Neko despised and snuck up on to smack as the opportunity presented itself, Neko became more and more the plotter of revenge.

Hubby liked to make up stories about the cats, giving them human characteristics.  He said Neko smoked too much and paced at night nervously, chain smoking and planning the demise of his competition, the other cats (except Buster).   At other times he said Neko would take a bus to Hialeah to get Cuban coffee and play dominoes.  Neko was decidedly angsty, bemoaning loudly the existence of the other cats in the household that took away from what should have been his attention and love.

If you spoke to him, he always spoke back, making eye contact.  He was also a real steak and beef lover.  When hubby would make steaks, the smell of the meat cooking would make Neko run to either of us and demand our attention, meowing loudly as if to say, "I want some!!"  One time I made pork chops and while we were eating, Neko ran to the kitchen, jumped up on the counter and grabbed one for himself.  All of a sudden we saw him run past us to the bedroom, his skinny light body dragging a pork chop half his size awkwardly.  My husband had to run to catch him before he took his booty under our bed and we couldn't get to him.  Somehow the smell of spoiling pork chop bone isn't what I want under my bed.

Neko could be mellow, too.  His favorite thing was to jump up on my desk when I'm working on my computer.  He would then carefully pick his way over to my lap where he would lay his head down on my chest, curl up and purr.  My job was to pet him and breath on his head and give him little kisses.

Another thing he loved to do was to race ahead of me no matter where I was going in the house, practically cut me off, run in front of me and skid on the floor mats.  Then he would stop and crouch and stare at me as if we were playing and I should chase him, which I sometimes did.  He literally bounced off the side of a wall if he had to make a tight turn.

Neko was a black and white tuxedo kitty - always dressed up and ready for a party.  I like to believe that he is with his Maker now, as someday I'll be - and we'll be together again.  Perhaps he's bounding around somewhere or laying with the warm sun on his fur.  I'm sure that instead of being stuck to just one word, "meow", he will now have a whole vocabulary and can express himself as he always tried to do.

Below is a picture of Neko from just before this weekend.  I am so glad I took that picture, not knowing at the time it would be his last. 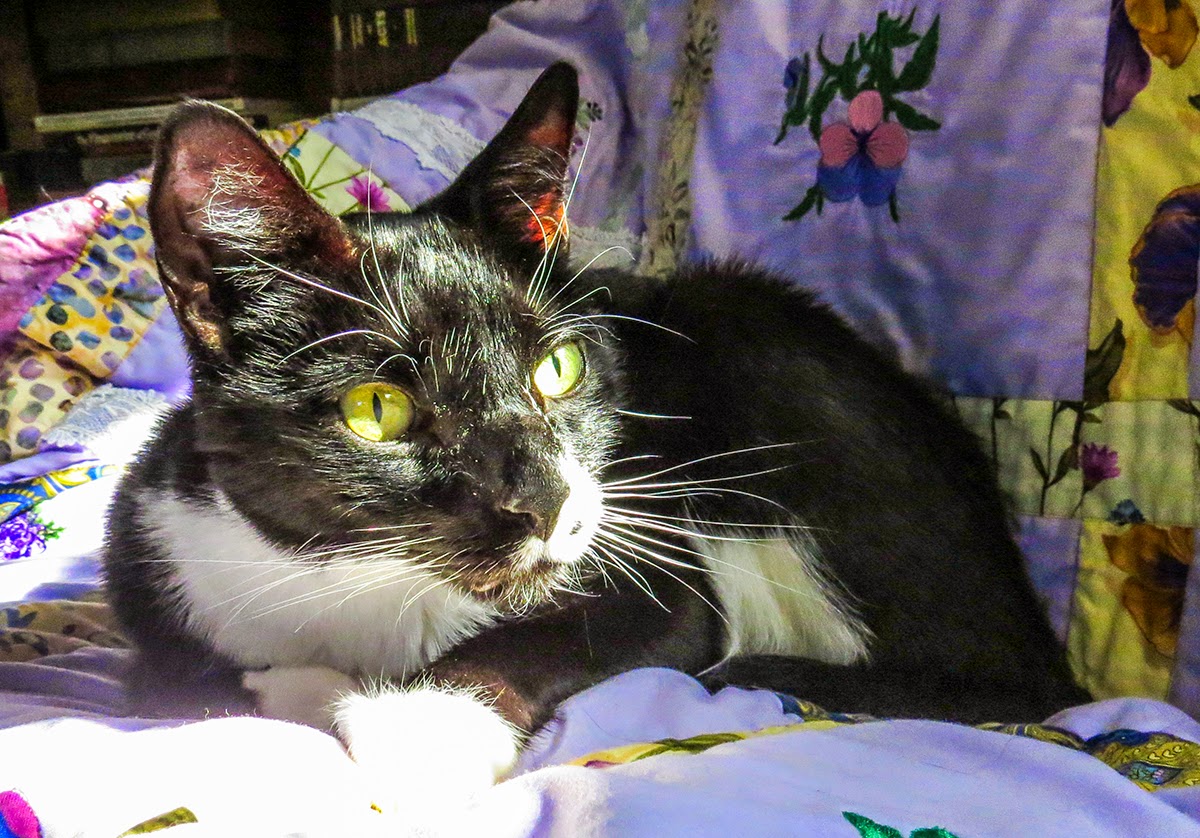 Such a sweet face.  He loved to roll on the floor on his back, purring and waiting for a belly rub. 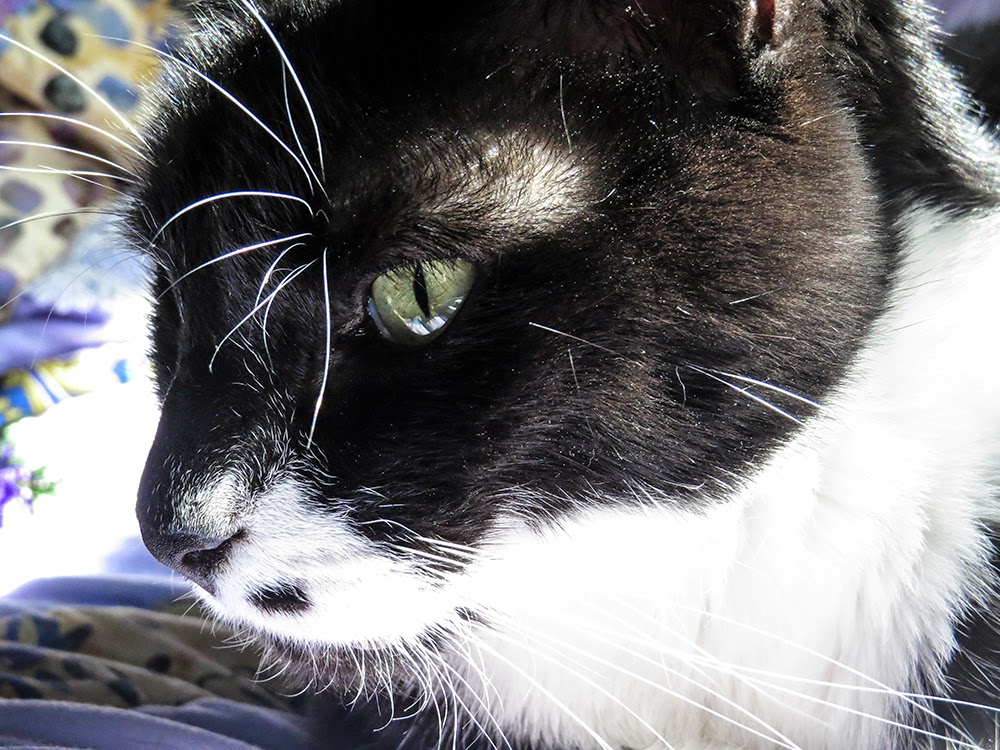 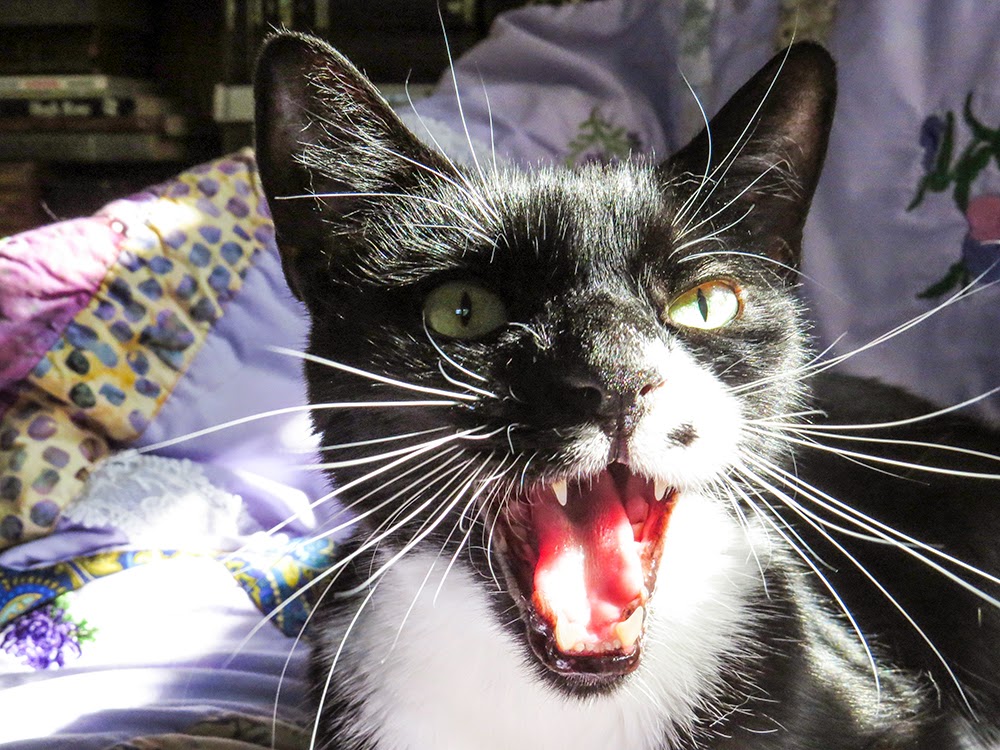 Something we saw a lot - Neko talking, in mid-Meow.  He was very vocal.
Posted by Susan Humeston at 7:09 PM

Beautiful . . . . . . .I will miss his angular, lanky trot, his very vocal comments on just about everything, his unusually studied presence at your feet when you had food and he was hoping for a morsel or two and his jumping up on the counter by the stove hoping his Aunt Cheryl was going to dispense some sneak treats . . . .as I was wont to do

I hope you like Julia's Story! The detox book I used is by Diane Sanfilippo called the 21 day sugar detox. It has a meal plan and grocery list. It is very helpful and the recipes are good. Some take a long time to make though so I have been picking and choosing off the meal plan. Basically I bread, pasta, white rice, potatoes or sugar. Lots of meat and vegetables. All the expensive stuff, but when you cut out dessert and snacks is you save some. It is not a permanent plan just a kick start till you change your taste buds. Good luck!

I just happened upon this post and I'm so sorry for your loss. It's terribly hard to watch a pet suffer and not be able to help, and just as hard to make that final decision. A vet once told me that's the last act of love you can give give them, the gift of rest. And what a lovely tribute too. Now Neko can live on in other hearts besides yours!

Bless you,
Marty in PA

What a lovely post - thank you so much!! Although Neko can never be replaced, just like people, he was an individual - we have 2 new kittens. They are black and whites, evidently something the humane societies have an overabundance of, so they were "buy one, get one" from our local Humane Society. Brothers - I've just about decided one is "little Crow" and the dominant one is "Jet". Not sure about the dominant one yet. I'll have to post pictures of them. But rest assured, like all my past pets, I will NEVER forget my baby Neko.