How did THAT happen???  It was just Christmas and next week is Easter break.
Hubby and I have been VERY busy.  In the yard, both front and back, in the house, and, of course my favorite, the dumb daily chores that often take up so much of my time (besides full time work outside the home) that I haven't time left for extras.  This past weekend I took down all the baskets I have attached to the top of the walls near the ceiling.  I was cooking one day and feeling all cozy and clean and using a shiny new pan...and I glanced up at the baskets.  BIG MISTAKE.  Their dust bunnies had children it was so bad.  Then I made the additional mistake of looking at the ceiling fan - ewwwwwww.   It sure spoiled that oh-so-homey-clean feeling.  So.....this past weekend I took down the baskets and took them out in the back yard, power sprayed them with the hose and set them in the sun to dry.  When they dried, I took them back in and displayed them again in the same place, but added some metal signs that were on sale at JoAnn's Fabrics (is it still called that?) at 75% off.  At that price I thought I was finally paying what they should have cost to begin with.  Here are some pictures and you can even see the clean blades of the ceiling fan!! 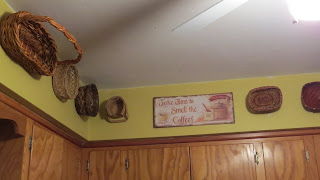 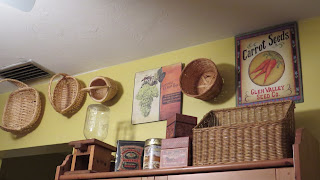 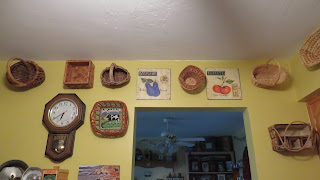 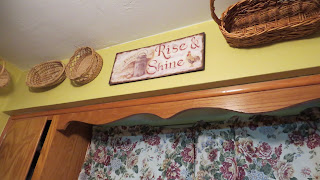 While I was working on the baskets AND, incidentally, moving the microwave to another counter (and moving all the stuff on THAT counter to where the microwave was), hubby was emptying an old bookcase in the living room by the door so we could discard it (old and made of fiberboard) and replace it with a nicer looking  Ikea bookcase - no better made, but wood look finish and much newer.   Once the old bookcase was removed, the floor underneath and the wall behind had to be scrubbed.  Then, once the new one was in place, all the books had to be dusted and replaced, except for some we decided to give to Good Will.
I know this doesn't sound like a lot of work, but it was exhausting for one 57 and one 60 years old, both not in the best of physical shape.
It sure does feel good, though, to look toward the corner with the new bookcase and feel satisfaction, and to look above when I'm cooking or doing dishes - and see CLEAN.
Posted by Susan Humeston at 11:10 PM No comments: