Phew - as you could see from my last post, yesterday was bad.  My mind just wouldn't let go of fear and self-blame and self-recrimination, guilt - you name it.  It wasn't fun, but my sister and Island Rider both commented wisdom, love and prayers - and I thank you both.  So enough about that.

Frustration in the back yard - there is a neighborhood cat and a hawk on vacation that keep scaring the birds eating at my feeders.  Between trying to spray the cat with the hose (when I catch him back there, which is pretty much daily) and clapping loud and yelling at the hawk - I'm ready to put a net over the whole yard.  That would keep the hawk out.  Now what about the cat?  Maybe I'll go to the hunting store and buy coyote urine or something (how do they produce THAT product???) to spray at the 2 entrance areas where Mr. Cat jumps over our fence.

It's very frustrating trying to run a small Eden on this fallen planet, and keep it protected for certain creatures by keeping other ones out.  I'm not even as angry about the hawk as I am about the cat.  Hawks are inevitable - cats not so much.  If people kept them indoors.....rant, rant, rant (fill in the words).

Glad it is heading toward Friday tomorrow - AND - it's my birthday this weekend.  Maybe that is part of yesterday's angst.  My husband turns 60 this year - he's none too thrilled himself.  For better or worse, we have similar temperaments - so he gets angsty, too.  What a pair!!

Next up- pictures from a day out in nature recently. Nothing makes me feel better than a trip into the middle of nowhere for the day.  We went to Dinner Island in Hendry County.  This is a piece of land that is not an island and no one serves dinner.  I have no idea why it's called that, but it's next to Devil's Garden and Cow Bone Slough, so go figure.  It is farming country that has been purchased by the State of Florida and, once the farmer's leases are up, it is being released back to it's original wildness.  It is one of the few areas where, if you are the luckiest person alive, you MIGHT someday see a Florida Panther.  When we pulled into this wildlife area from Rd 846, there were a number of campers parked in a cleared field next to some trees on our right.  A man on horseback was leading a number of other people on horseback - and it looked SO inviting and wonderful to travel that way, then come "home" to a little "house" on wheels with everything you need and a comfy bed.  I pictured them lighting a fire later that night and cooking and sitting out under the stars.  There would be no interference out there with the velvet sky and the starlight.  Maybe hubby and I could rent an RV when it gets cold again, and take it out there overnight.

This is along the canal that goes right through the Indian village on Jose Billie Highway, a.k.a., Rte 833.  It was a cold and beautiful day. 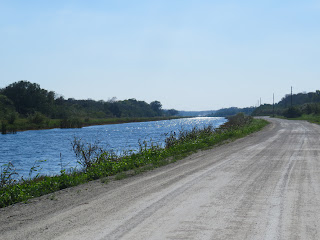 Below is an area of "Dinner Island" that has been allowed to return to the wild.  It is beautiful.  It was SO hard to turn the car around and head home..... 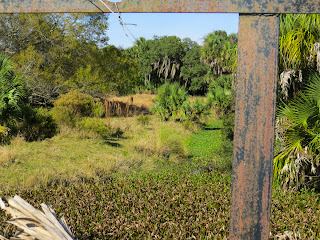 We NEVER are able to photograph Belted Kingfishers, a.k.a., "Bed Head Birds" because they are usually so skittish, the minute you aim your camera and try to focus, they have flown away.  But this day we were able to get a female (below) and a male.  The female has a bit of red on her chest. 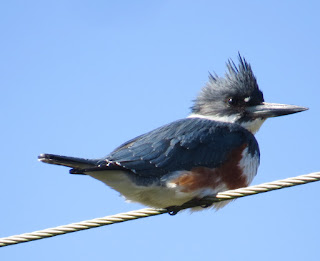 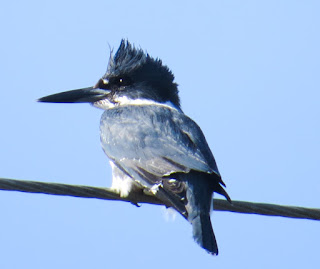 Below is a Scissor Tailed Flycatcher whose tail isn't open so you can see the two strands/feathers.  They have a lovely peachy chest and underside and VERY long feathers.  This is a migrant and not here in the summer.  They love Hendry County and are often scene in a few select locations there, among them route 833 and route 846, which we were traveling. 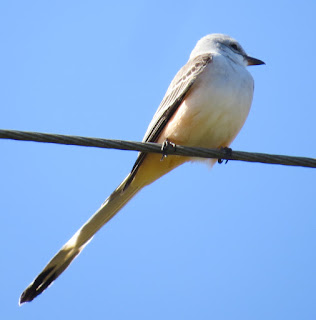 Another migrant.  Either a red shouldered or a red tailed hawk, I think.  They are VERY common here in the winter.  We have a sharp shinned hawk that goes after doves and pigeons in our back yard.  This fella below is bigger and more formidable. 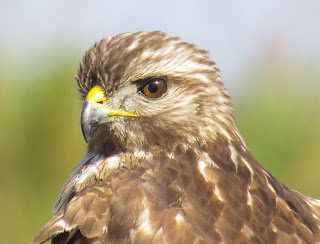 A Phaon Crescent butterfly on some roadside plants. 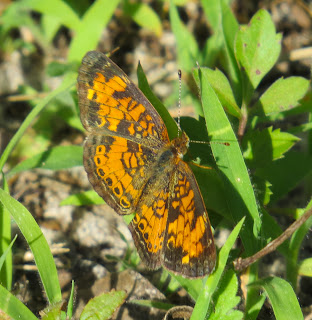 Another area of "Dinner Island" 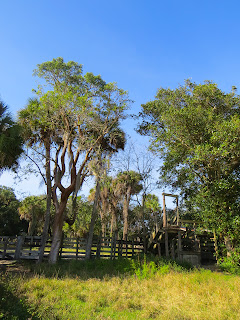 Some sort of store, I think, on route 833. They had nice LED Christmas lights on the roof, but we couldn't appreciate them in the middle of the day.  Funny - it was a Saturday - and the place was closed.  I really have no idea WHAT it was.....

Posted by Susan Humeston at 4:58 PM