I belong to a Yahoo group of people (mostly women) who read and enjoy Grace Livingston Hill books.  They discuss the recipes, the clothes, the history evident in the housekeeping descriptions and social mores. That is one of the charms of GLH books - the reader gets a view into a long bygone world.  That and the fact that the books often incorporate real places and real people, such as famous Evangelists and/or pastors of the past, makes them all the more attractive to me. Each book has the gospel message somewhere, along with words to old hymns, old popular songs, old recipes and more.

In the midst of one of these discussions, the founder of the Yahoo group mentioned trying to locate an authentic recipe for real buckwheat cakes, "light and fluffy and delicious" as described in one of the GLH stories.  She found an old fashioned recipe in a book called "Practical Housekeeping" from the late 1800's, and I immediately looked the title up on Abebooks.com.  I found a copy and bought it.  It was a little pricey for me, being about $45.00, but I knew it would be an interesting reference book.

The copy I ordered came from the U.K., and it arrived today.  Imagine my astonishment when I opened the front cover and discovered an inscription from Elizabeth Cady Stanton to her daughter, dated 1881.  I vaguely remembered that name from history as someone who fought for women's rights in the 19th century, and, after consulting Google, I found I was correct.  She was BFF's with Susan B. Anthony and had quite a long, interesting life.

Here is a picture of what she wrote to her daughter: 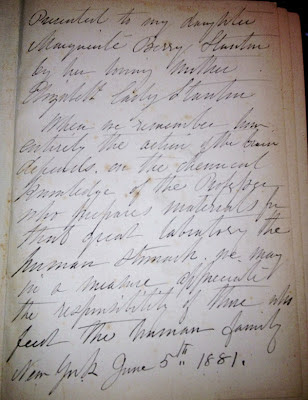 As usual, click on the picture to get a bigger, better view.  I believe it says.,
"Presented to my daughter Marguerite (sp) Berry Stanton by her loving mother, Elizabeth Cady Stanton.
When we remember how entirely the action of the brain depends on the chemical knowledge of the Professor (?) who prepares materials for that great laboratory the human stomach, we may in a measure appreciate the responsibility of those who feed the human family.
New York, June 5th, 1881."

Imagine that!!  Elizabeth did indeed have a daughter Margaret, but perhaps this was a wife of one of her sons? I'll have to do more research.  I must say the book doesn't look much used.  I have a feeling that Elizabeth Cady Stanton's views on women's rights and their equality to men rubbed off on family members, and so a cookbook or a housekeeping book might very well not be consulted much.  ECS (the great lady's initials) came from a well to do family, and her father owned one or more slaves.  One of them stayed with the family after the abolition of slavery in the North in the late 1820's. I'm sure her children, when they acquired their own homes, had servants.  In that case, the "housekeeper" would still be the wife, but she would only oversee the servants, not do the work herself.

Here is the title page of the book, where it was published and the front and back of a doodled on piece of paper that was tucked into one of the pages: 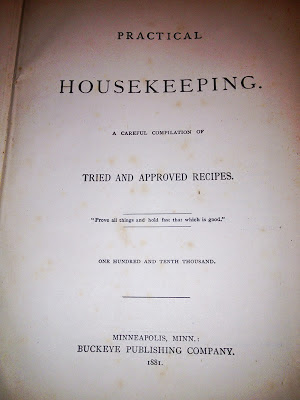 I'll be looking up the precursor of this housekeeping book called "Buckeye Cookery and Practical Housekeeping". 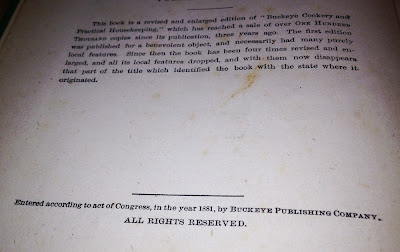 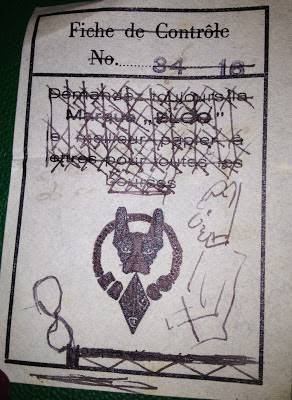 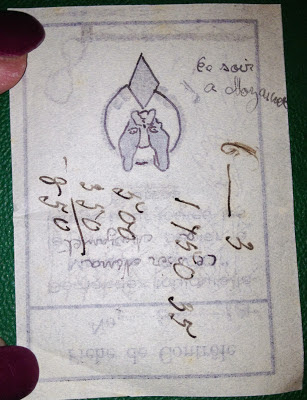 I have to figure out what the little paper says in French under the doodles.  Meanwhile, an autograph only of Elizabeth Cady Stanton is worth $450.00, should anyone want to pay that for a little scrap of paper: 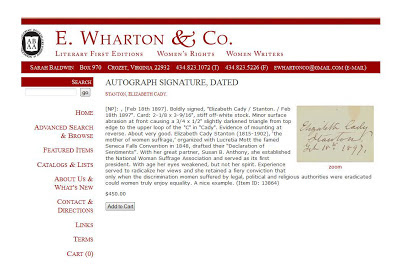 What a surprise for this Monday afternoon!!  I have to believe that the shop in the U.K. that sold me the book didn't know who Elizabeth Cady Stanton was or the book would have been considerably more.  I don't want to sell it - it's just a really neat experience for me.
Posted by Susan Humeston at 6:03 PM

Hello,
I have sent a link to this post to the great-great-granddaughter of Marguerite Berry Stanton. Marguerite was the wife of Theodore Weld Stanton, Elizabeth Cady Stanton's son. He moved to Paris to work as a journalist, and he married Marguerite in 1880. They had 3 children--Elizabeth (1882-), Robert (1885-)and Helen (1889-).

Thanks for posting this! It was delightful to find it.