Today South Florida got it's first real cold front.  The past few days it rained quite a bit and felt quite summery - humid and warm and wet.  Then yesterday morning, the wind began to blow from the northwest and it had a slight cool feel to it.  The clouds began to move away fast.  By the afternoon, the sky was clear, deep blue and the air was crisp and bright.  A total about-face in weather!  Last night I lit the Chiminea in the back yard for the first time this year.  It was windy and cool and the stars were quite clear, even in the city where it's difficult to see stars because of the light pollution.  The wood smoke smelled so wonderful - I could just sit and watch the flames for quite a long time - so soothing.  We're going to light it again tonight - maybe I'll take some pics of that.
Meanwhile, since I knew it was going to be brisk today, I knew hubby and I would want to get away into the out of doors, so on the way home from work yesterday, I made sure we had sandwich and other picnic items.  When I arrived home, I made sure our camera batteries were all charged up and packed the digital cards, lenses and lens cloths in preparation.  Now all we had to do was get up with a minimum of preparation and off we could go!
We left the house this morning at around 7am.  It was still windy and the air was very cool.  I had on a short sleeved shirt under a long sleeved sweatshirt and we still had to put the heat on in the car.  Mmmmmm - it felt delicious!!
Once we got out of town, it felt like a burden was lifted.  We could see out over the Everglades grasses;  there were great blue herons and little blue herons in the canals.  There were hawks and belted kingfishers on the electric wires.  We decided to drive I-75 to the Snake Road exit, which is also known as route 833.  Once we passed the Indian town, we were out in the beautiful boonies on a two lane road, very little traffic - and lots of lush trees lined the road.
Here are some pictures I took.  One is of an orange moth I happened to notice clinging to a plant off the road.  I was able to pick him/her up and put the moth on my hand.  What an absolutely gorgeous moth!!  Well - here come the pics: 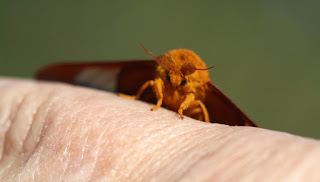 Isn't that a cute face above?  I love the feathery antenna and the fuzzy orange body.  It's called a Pink Striped Oakworm Moth.  I'm not sure if this is a male or a female.  The female is supposed to be brighter and a little larger, but since this is the first of this species I've seen, I have nothing for comparison. 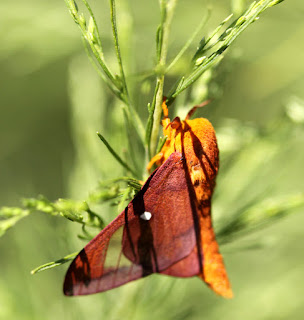 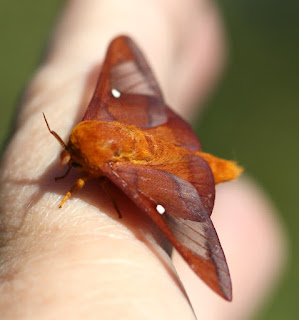 Next up is a White Peacock butterfly.  One of these pictures shows the face clearly and the others focus on the lovely green spot on his/her back. 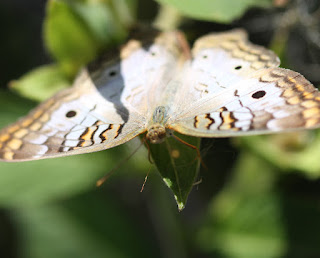 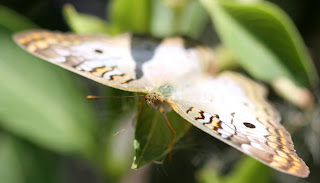 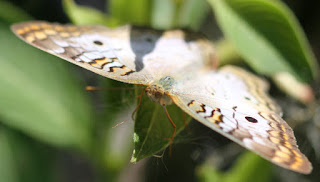 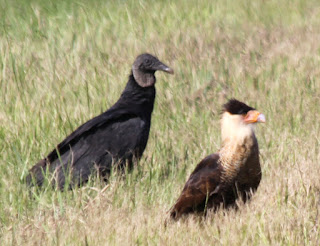 Next, farther west on route 833, we saw these two unlikely "friends" munching on some roadkill.  The black bird is a black vulture - pretty unattractive bird;  but the other is a Crested Caracara.  Great name and distinctive looks.  I believe he is the best looking carrion eating species in the Western Hemisphere, but I could be wrong.  Love the big red "nose". 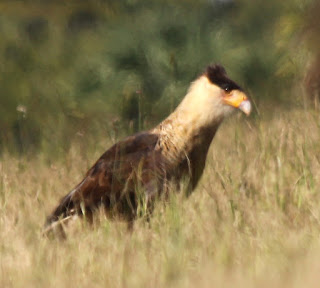 I was too far away to get a good sharp closeup of the Crested Caracara, but you can see his eyes and coloring pretty well here. 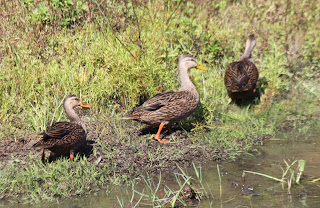 Above are a few ducks that were in a canal as we entered Immokalee.  I think they are Blue Winged Teals, but I see no evidence of the little blue wing spot, so I don't know.

We continued driving, turned onto route 846 and headed past the Hendry Correctional Institution, where we've seen deer before, towards Immokalee.  We had never seen Ave Maria, a completely new town built by the founder of Domino's Pizza, based around a very Catholic college.  Ave Maria is a conservative Catholic college.  The professors and everyone who works there must acknowledge that they are practicing Catholics.  The campus is lovely.  My husband took pictures which I believe he will post.  There is a town center with lovely shops in three story townhouse type buildings.  They are painted bright yellow or ochre - all earth colors and are quite attractive.  The 2nd and 3rd stories are living quarters.  There is a Publix, a Fire dept and EMT dept., an urgent care facility and a few neighborhoods of new houses.  There also appears to be a school - perhaps elementary or high school - we couldn't tell from the name of it.  The whole area is just beautiful.  It looks like someone just plopped a pretty new town right down in the middle of nowhere, which is pretty much what they did.  Ave Maria isn't far from Naples, so the beach and city life is nearby.  After getting coffee at the Ave Maria Bean and touring the college bookstore, we decided to head home.  It's just about time to light the chiminea and toast some marshmallows - hope you all are having a wonderful weekend!
Posted by Susan Humeston at 6:48 PM

Thank you for this post! We were visiting northern Florida and discovered a pink-striped oakworm moth. Your post is what we found to identify it. We enjoyed the other photos and especially the peacock butterfly!