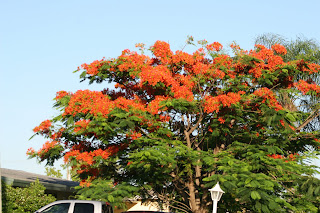 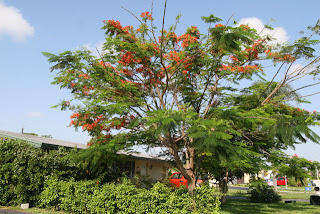 Compare the top picture taken on June 30 to the one below taken a few weeks ago - the whole top of the tree is in bloom. Someone said that the poincianas are so happy that there was no hurricane last year that they're all blooming like crazy. May this year be the same!

Today is the 4th of July, but in South Florida, there is usually so much rain in the afternoon and evening, that it precludes much outdoor activity. Right now it is about 4PM and the skies are black and pouring rain, with lightning bolts and cracks of thunder.

Regarding the 4th, I love my country, but the days seem dark and threatening, just like the sky outside my window. America has changed so much from the great behemoth that turned the tide in WWII. I read Alistair Cooke's "The American Home Front 1941-42" not long ago - he wrote it while traveling around this country during the early days of WWII. We made everything here - no "made in China." The immigrants had not overpowered the culture of America yet, but assimilated it. The observations he made in some of the small towns he stopped in were not starry eyed, but included both the good and the bad, but the overall impression was one of strength, a nation of Judeo-Christian ethics and one that believed in a right and wrong. The people in general were willing to sacrifice whatever was necessary, including their lives, to fight off Hitler. There was no recorded whining about rationing, food substitutes, and worst of all - not knowing where a loved one was or whether they were alive from one day to the next, or would ever come home again. Perhaps there were those who disapproved of the war and those who resented the incursions into the comfort of their lives, but they were shunned in their communities and they were not given a pulpit to preach from. That American, I fear, is, not the norm today. And if it is, the Media won't have you know he exists.
Posted by Susan Humeston at 3:50 PM

Hello and thank you for commenting in my blog and saying you use Firefox and all is well with commenting.

And oh my! Do I ever hear you, in this first entry I have read here. I could go on and on, on your topics. 'Tis not the same in this War, as in WWII, and I know, 'cause I was there! Young yes, but I remember.

We ARE in a War at present. A War years ago declared on us and on civilization as we know it. But the media and so many liberal thinkers will not allow many to say so. Except in our own 'circle,' as it were. -sigh-

I'm 70 and I get very weary. Tired of the fight to change minds. Which I do more of, in other blogging venues. I make this "Pretty Blog Land" venue, to escape. {'smilnsigh' and the other 3 of mine, here}

But anyway, I get so tired at times. And yet, can not turn my back fully on the issue and 'go into the woods' of pondering, in my later years.

You are probably a lot younger than I am, but you sound as if you have many of the same worries as I do. -sigh- Happy to have met you.

I'll have to visit your other blogs. You use the word "weary" - that is the best descriptive word for the feeling my husband and I both get with this world. I'm 51, old enough to remember the late 50's and early 60's when there was still a feeling of strength in this country. Yes, there was the Bomb to worry about, but good and evil were still recognized as such readily. Thanks for posting a comment here! I don't get many comments yet, and when I do, I get so excited!!