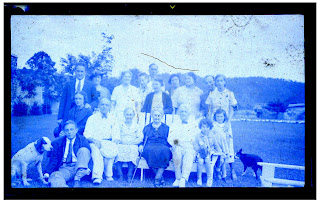 Above is a picture of Laverne's family taken in the 30's, maybe. Laverne looks about 13-15 years old, and she was born in 1921, which would make this anywhere between 1934-1936. Laverne is in the back row, 4th from the left and her grandmother is seated in the black dress in the center, and her mother is in the back row, second from the left. Laverne's grandfather and father had already passed away, so the older man next to her grandmother must have been the grandmother's brother. The picture is in Pennsylvania somewhere, although her grandmother originally (before the Civil War) came from Maryland, I believe. I found this picture as a negative among Laverne's belongings that I inherited. My scanner was able to take the negative and reverse it in a scan so that I could see what the original picture was. Unfortunately, everything is blue and white, but it's better than looking at the negative. I wonder if this negative was ever made into a picture. If so, I don't have it. I also wonder if that old farmstead to the left in the picture is still there, or if this is a suburb of somewhere now, with condos and strip malls. I would love to believe it's still there - and since I don't know, I'll assume for the sake of my fantasy, that it is. Laverne, her grandmother and her mother - and other aunts and great aunts - lived in a big three story house in Pittsburgh - perhaps this is outside of Pittsburgh somewhere. 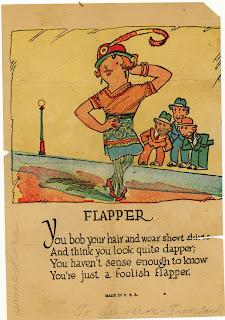 This is some sort of greeting card that was either sent to Laverne or her mother. Many people disapproved of the behavior of the typical flapper - smoking, drinking, wearing revealing clothes and makeup, cutting their hair short, etc. I can't help but think of Grace Livingston Hill's books when I look at this card. I also can understand, when watching old movies from that time period, why people disapproved. I was watching some old movie the other day with Harold Lloyd - from the early 30's. There was a skinny, rather unattractive girl in a clingy satin pants outfit that was trying out for a movie part - as part of the plot in the movie - and she just looked trashy. Her line was, "hey, who says I ain't got sex appeal? I'll show you sex appeal!!" Nowadays, of course, that's no biggie. But back then? Shameful!! Nice girls didn't go to the movies - or maybe just nice, Christian girls. But still - I could see where the movies modeled behavior that was frowned upon. Now, all those movies are fascinating to me - a glimpse into another era. I know Laverne's Grandmother was a Christian - and I'll bet some of those older ladies in the picture above disapproved of some of the behavior in movies, and whatever the 1930's model of the flapper was.
Posted by Susan Humeston at 4:31 PM