Cleaning Out My iPhone Pictures

In the process of writing the blog post before this - the one with all the pictures from Joanne's Fabrics and Home Goods, I downloaded/cleaned out the photos from my iPhone from the last 6 months.  The iPhone has a very good, handy camera, which is what I used for all the pictures while shopping.

Below are the pictures I "found" while downloading the shopping ones.....


Poor Beasley, my rescue Cockatoo, who has always been a feather plucker.  I've had him now for about 14 years and I have NO idea how old he is.  He could outlive me easily, which I would prefer he does not.  He's been handed around enough in life - from his first owner to Flamingo Gardens as a display bird to a small cage in a back room by himself, where my daughter begged me to bring him home.  He was free and so I did.  Poor baby.  If only I lived in Australia - or could take him for an extended stay there.  I dream of getting him acclimated to the wild life there, where he is indigenous, and then setting him free to be a Cockatoo in all his glory.  Sigh.
AS USUAL, CLICK TO MAKE LARGER (I'm beginning to despise the word, "embiggen", but I shouldn't since it is so appropos.) 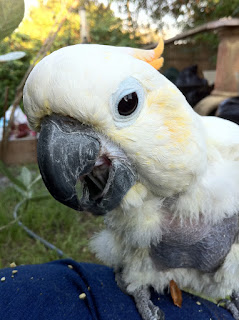 My husband's cat, Buster - the one who is biting me in the previous post.  He is beautiful and very spoiled. 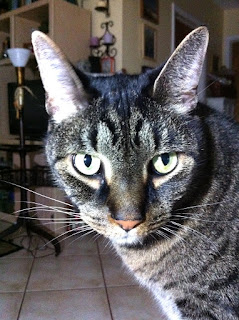 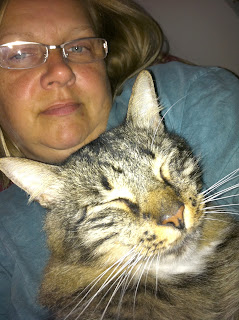 You see Squee on my lap in my favorite chair above.  I'm reclining and he's purring.  Below, he is asleep leaning on my leg.  He is my furry, loving, squeezable Maine Coone baby.  He is the most mellow cat I've ever seen, and he is glued to my side whenever I'm home. 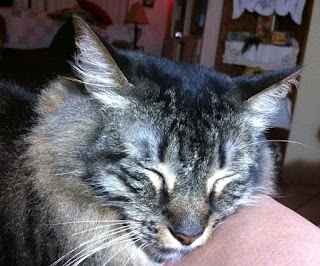 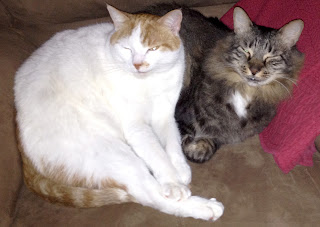 Above Squee and BFF Junior Beans.  Junior Beans, the quite round and fat white and orange cat, was an orphan in our back yard a few years ago.  It was a cold, rainy day and we saw him out there, a small kitten, trying to eat a peanut we had put out for the squirrels.  That was that - even my husband, who often vows that we have 2 too many cats, was ready to bring him in and shelter and love him.  And so we did.   Below - one more of Squee doing what he does best - relaxing and looking cute. 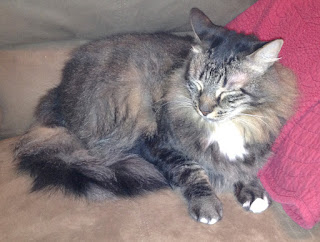 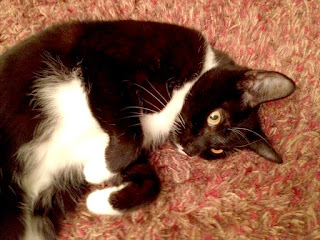 Above is Neko, my daughter's ex-cat.  Actually Squee was hers to begin with too.  I think she got him from a shelter in Jacksonville, FL when she was in college there.  When she moved home I got way too attached to Squee, so when she moved away - he stayed.

Neko, the black and white, (Neko means "cat" in Japanese - my daughter named him - all things Japanese being the craze at the time) is a manic cat.  He is jealous of the other cats, he skulks and pouts and meows pitifully about everything.  We call him many things, among which are Goth Kitty, Insane-o Cat and the O My God Cat because his eyes get big as moons when we cook steak.  My husband says that at night Neko smokes incessantly, pacing back and forth nervously, while planning his revenge against the other three cats who have usurped his King Cat status.  He loves belly rubs as in the picture above.  He is on my bathroom rug in the picture above - it seems whenever one of us uses the bathroom, the cats all want to come in and be petted/drink water out of the sink faucet/meow in horror while we shower.  Neko cannot be picked up easily - he is very light and agile and another nickname for him is "Killer" because he is lightning fast with his paws and they are big paws for such a lanky cat.  When I sit in my chair in front of my computer and put my feet up on my desk, Neko jumps into my lap and settles down for a good rub and a purr.  Otherwise, there is no cuddling with Neko.

Ok - I mentioned I had cleaned the photos out of my iPhone.....now for some pics of an insanely decorated house from Christmas 2011.  There were literally crowds of people to see the lights on 12/23, when we visited.  It was a zoo, but it was pretty, as you will see.   I tried to be "artistic" with the light bulbs in some of these, but you get the idea. 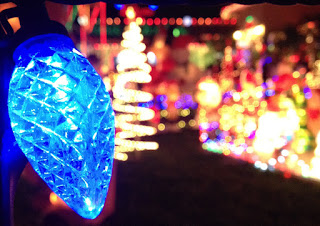 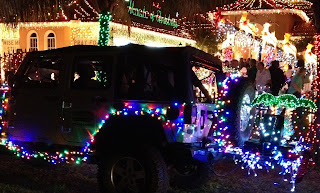 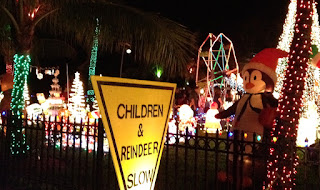 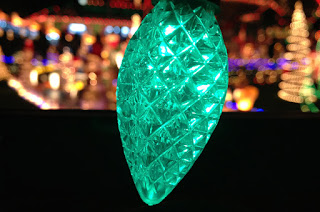 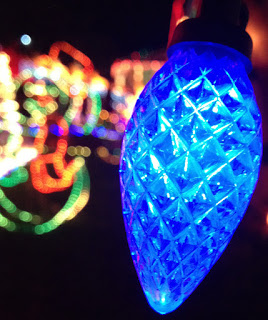 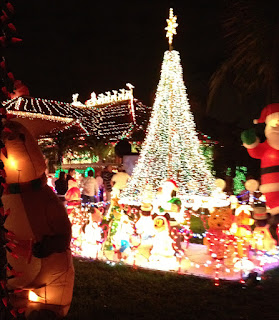 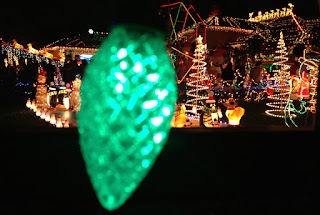 Can you imagine how much work this is to set up???  How much money it costs?  Yikes - I'm just glad someone wants to do it, since I get to enjoy the beauty.  Yes, it is not tasteful, but it is glorious in a huge, jumbly, colorful way.

Now for some pictures from our Myrtle Beach vacation in November.  My husband had to attend a conference, so his work paid for the airfare, car rental and hotel (which was lovely).  I just had to pay for my own airfare and some of my food, as his food allowance sometimes covered both of our appetites.   You might be saying, as you look below, "so where's the beach?"  It was November and not too sunny while we were there, so we didn't spend much time at the beach.  I don't like the commercialization of places like Myrtle Beach, anyway.  I much prefer the little towns inland, like Conway, which is only about a half hour northwest of Myrtle Beach.  It is an historic and beautiful little town and it was already decorated for Christmas when we visited.

The first picture below is of the moon shining on the ocean, taken from our hotel room at about 3AM one morning.

Remember - these are mere iPhone pictures - my husband had the "serious" camera and he took many pictures of Conway and Marion, another town we visited.  I only took a few photos here and there, so you don't see anything of the GOOD stuff.  Below is a cotton field we passed on the way to Marion.  Marion is south west of Conway and farther inland.  On the route to Marion is Sparky's, a "South of the Border" kind of very tacky, 50's type tourist shop.  We loved it.  They had the usual postcards, but they also had fudge, pecans in every conceivable form.  The sugared pecans were delicious.  The place is a bit run down, although the paint is bright.  If you've never heard of "Sparky's" - don't worry, we hadn't either.  Until we were driving from Conway to Marion, where every mile was another silly sign about how we couldn't miss Sparky's, that Sparky's had it all.  So how could we turn that down?  So you guessed it.  No lovely pictures of historic Conway or Marion in my photo collection, but there ARE pictures of Sparky's. 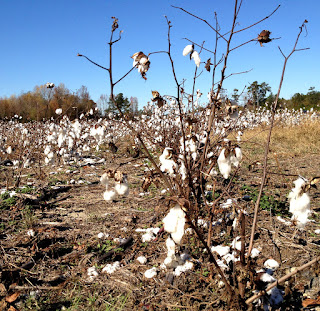 Conway is on the Waccamaw River, and there is a River Walk along the Marina there that is just beautiful.  I picked these little pink flowering weeds out of the grass and took a closeup of them.  I don't know how people can disdain what we call "weeds".  They are wild flowers, really, and if you look at them closely, they are lovely.  These had a delicate scent. 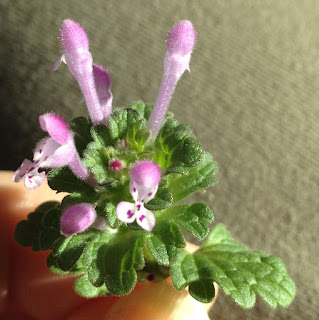 Just as I promised - pictures of Sparky's.  My husband is pointing at the dogs painted on the window behind him.  That is evidently what Sparky looks like.  You can see the tackiness below.  Oh yes - and we can't have a tourist attraction without fireworks.  I don't understand that, but that's just me. 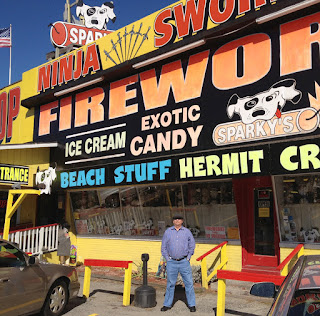 A potential black mail photo below.  My husband with a Davie Crockett raccoon hat on, which I forced him to wear and pose in.   Actually, he doesn't look bad - I bet that would keep you warm on a cold day - at least the original real raccoon hats - if you shoved it down over your ears....

Oops one more picture I forgot of Squeebles, my cat.  He is peeking out of a box.  Whenever we buy something that comes in a large enough box, our cats LOVE to jump in and play hide and seek with each other. 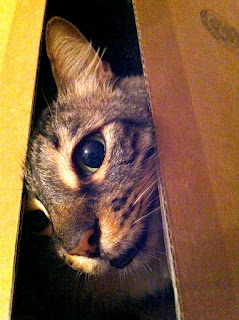 Below - I was driving home one day and at one of the intersections was a man with a beach umbrella over his head to protect from the sun, a dummy doll tied to the front of him (Naturally, I couldn't get a picture of THAT) and hanging down, while he carried this large sign.  I got the sign.   And yes - you read that right - he had a dummy hanging from around his neck..... 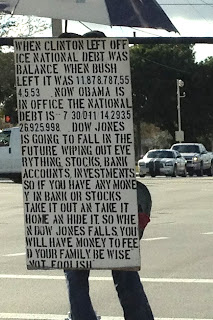 Here's a picture of the beach at Naples, FL from last May's vacation.  That was another conference my husband had to attend which I enjoyed while he worked.  The hotel was paid for and some of the food, as I mentioned before.  We drove to Naples as it is right across the state of Florida from us - a mere 2 hours at the most.  It was hot but absolutely gorgeous.  I sat under the wooden stairs that went down to the sand.  It was shady so I didn't burn too badly, except I did spend some time snorkeling in the clear water and my back got pretty burnt.  Just to lay on that beach in the shade and doze.....it was wonderful.  We are so blessed by God to be able to take vacations for so little money and enjoy the fancy hotels we would have to save up for a long time to afford on our budget. 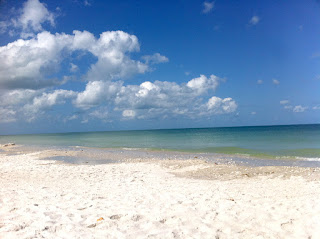 Brenda - I can get you a nice chair under the stairs in the shade and you can enjoy the view.....
Posted by Susan Humeston at 4:46 PM

Oooohhh... and a drink with a cute umbrella? There is a cold rain outside right now, that looks beautiful!

Miss Victoria is draped on the back of our living room sofa. I have yet to understand how cats can be comfy in some of their positions???

You bet - a drink with a cute umbrella.

Or iced herbal tea in a glass with a cute umbrella....

The beach on the Gulf of Mexico side of Florida is SO much nicer. The waves are usually much more gentle, the water clear and many more critters to see. Cute critters, like little crabs and pretty fish. I'm beginning to look forward to the summer when I actually go to the beach down here. The water is too cold now and the waves too rough. In the hot summer, the ocean is delightful - not too cold and sometimes the waves are barely visible and the water clear as a bell.