Since I had 2 weeks off at Christmas time as well as an extra week when I was sick with bronchitis, I did a lot of reading.

My all time favorite of this holiday season was, "Nothing Daunted, The Unexpected Education of Two Society Girls in the West " by Dorothy Wickenden.   The picture below is copied from Amazon.com - don't try to "Click to look inside" - nothing will happen. 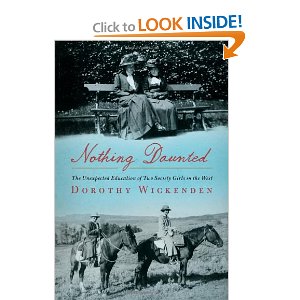 This turn of the century (19th to 20th) true life story is interesting historically in it's presentation of the still-isolated sections of the Great West at that time.  While much of the West and the Great Plains had been sadly cleared of it's aboriginal inhabitants and parceled out to white settlers, there were still portions off the beaten track that reflected an earlier, more pioneering time.  Such is the small town of Elkhead, reached at that time only by the famous Moffatt railroad in Northwest Colorado and then by horse.  While many other parts of America were passing beyond the "one room schoolhouse", Elkhead had a brand new school that needed teachers for it's single class of all ages.  Also, while many schools were beginning to require some sort of teaching training and "Normal" schools were educating primarily women to become accomplished instructors, the Elkhead school was happy with 2 young girls from the privileged class that may not have had a background in teaching, but were well enough educated themselves to impart the necessary knowledge to the country students.

One of the young women was the grandmother of the author, while the other was the grandmother's lifelong best friend.  I loved reading about their central New York State upbringing and then their boredom with post-school life.  They didn't want to do the typical thing, which was to get married and have children right away.  They wanted to make a difference somewhere while at the same time having an adventure.  I highly recommend this book for readers that enjoy the history of the American West.

Next, I consulted the blog of one of my favorite people - Coffee, Tea, Books & Me - for "cozy book and film recommendations".

I purchased "My Side of the Mountain" by Jean Craighead George.  This was a "cozy" book recommendation and I love mountains, so it was a no brainer.  The story was a surprise to me.  Not only does it take place in my birth place stomping grounds - the Catskill Mountains - the time period covered is during my childhood.  A much more exciting childhood than I experienced, and one which I would have LOVED to try - at least for a day or two before getting scared.  The hero is a teenaged boy whose New York City parents let him "run away" to his grandfather's land in the Catskills.  Although the house is long gone and so is the grandfather, the land is still in the family.  The boy makes his way to the land with lots of wilderness training and knowledge under his belt and makes a successful stay for one whole year - 4 seasons worth - in the mountains.  What is "cozy" about this?  His house.  He finds some old growth fir trees and finds a way to partially hollow out a section of the the huge base of one, essentially carving himself out a small home inside the tree.  Using only what he can find in nature he fashions a stove (he finds clay that will harden) with a pipe that carries the smoke out a small hole in the tree.  He makes a bed from strips of bark on a wood platform and finds deer that have been killed by hunters but never retrieved for the bed coverings, as well as clothes and a door to his tree house. (Lest you think he takes the entire dead deer and drapes it over things, he skins it, of course, and uses every part of the carcass he can.) He finds all kinds of plants to eat and catches a baby hawk whom he trains to hunt for him.  The details are fascinating and the coziest part is the first major snowstorm.  Our hero has prepared all summer long for winter with lots of smoked meats and stashes of nuts and roots.  He has a working stove that provides warmth and uses birch bark to write on.  He uses a turtle shell with oil in it for light.  That first blizzard is a whopper of heavy snow, wind and ice cold temperatures, but our hero is warm and very pleased with himself inside his comfy tree house.  Needless to say I loved this story.

Next, I downloaded a free book onto my iPad, which I use like a Kindle (it was my husband's and he has moved on to greater things, so I have inherited the original iPad).  It is called, "Adventures in Contentment, Adventures in Friendship, The Friendly Road" by David Grayson.  This is about a farmer in the early part of the 1900's in New England who leaves his farm and goes wandering incognito.  This farmer is married and his wife tries to talk him out of going on his trip.  My only problem in reading this is imagining his wife trying to hold everything down, doing all the farm chores as well as her own while he galavants.  I'm sorry to say as much as I sympathize with Mr. Grayson wanting to "get away" in this very different way, I feel for his poor wife left behind and in charge.  If Mrs. Grayson had wanted to do something like this, I can imagine the disapproval of everyone at the thought of a woman taking off on her own and wandering the countryside.  Even so, I'm enjoying his side of the story and pushing visions of a very annoyed and put upon Mrs. Grayson out of my mind, probably in much the same way Mr. Grayson does in the story.  Each day he finds someone who invites him to stay to dinner and then to overnight, and these lovely new friends are all assisted by Mr. Grayson in some way, either physically or mentally.  I didn't finish this yet, but the first 6 chapters I have read are delightful.  They recall a time in America when one could do as he did and not only not be afraid of harm, but know that a welcome is just a house away when one is "on the hoof".  I read things like this to escape from the present which is rather awful to me socially.  While I sure do appreciate modern conveniences, I'd give anything to be able to go back in time to a more civilized time.  It's really not all that long ago, actually.....

Posted by Susan Humeston at 1:02 PM