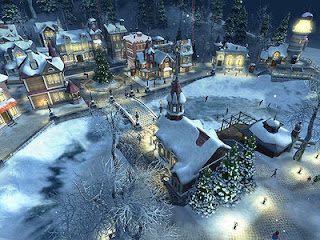 My husband has an endearing/sometimes annoying habit (mostly endearing) of picking a song - usually Christmas or Amazing Grace or Home On The Range or Oklahoma - his repertoire is quite limited.  He'll sing the tune of the song, but put another song's lyrics in instead.  So, We Three Kings tune is sung, but the lyrics are Amazing Grace - and he embellishes and adds/subtracts his own words as substitute to the established lyrics.  In short - he is a music rule breaker.  But I happen to think it's quite clever - we are made for each other, after all.
Yesterday, on the drive to downtown Miami, we got in a boisterous exchange regarding the lyrics to "Let It Snow".
My husband thought that the couple in the song were walking somewhere outside in the snow together, which is patently wrong - he cannot have listened correctly to the lyrics.  And so we started.

"Oh the weather outside is frightful,
And the fire is so delightful"


"I don't think there's a fire outside unless they're homeless people, sweetie."
"Sure - they could be walking home after being somewhere that there WAS a fire."
"No," I say, "it's a present tense fire, not past tense."
"You're such a literalist" he says.
I toss off the thought that she should not be letting her boyfriend drive home in the snow - he'll get in an accident.  Especially since the song was written in 1945 and the roads were usually windy two lanes (no super highways back then).
My husband says, "How do you know they're not married?"
I say, "Because he's going home after their date.  If they're married that's pretty strange behavior."
He says, "Maybe they're at his house and SHE has to walk home."
Me - "Oh - that couldn't be in the 1940's.  That would go against all conventional ideas at the time of the roles of women and men.  It would be improper for her to go to his house, and he could never let her walk home alone in a storm - you know that.  What a dumb idea!!  And even if there was a lout in the 1940's that would behave that way (and I'm sure there were), it would not be a feature of a widely known, popular song.  The song would reflect the better mores of the time, not the worst ones."
He reluctantly agrees.
He finally got me, though.  "How do you know he's driving a car home?  Maybe he's walking?"
Aha.  Let's check the lyrics


When we finally kiss goodnight,
How I hate going out in the storm,
But if you really hold me tight,
All the way home I'll be warm.


Darn.  He's right - there's no mention of a car.  He's probably walking home in a small town.  Sigh - the small towns of 1945 before huge thick ribbons of bland, banal highways connected everyone everywhere.
But they're not married, obviously.
And she's not walking home, it's him, of course.
And they're not walking together (he thought since she was holding him tight all the way home he'd be warm - that they were walking together.  Really clueless.)
My husband has some wonderful talents, but musical ability, both tonal and lyrical, is not one of them.  But he sure keeps me laughing and we sure have a great time discussing these oh-so-important subjects.
Posted by Susan Humeston at 12:01 PM

I still say she was holding him tight all the way home. And they were walking, obviously.